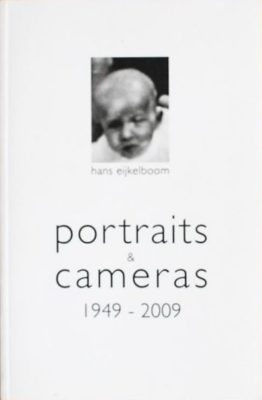 In Portraits & Cameras 1949-2009, Hans Eijkelboom creates a 60-year survey of both himself and camera technology. Beginning the year of his birth, Eijkelboom pairs an image of himself with an advertisement of a camera – also from that particular year. What results is an “annual” of sorts, a portrait of two things coming of age, growing up and growing older. But while one grows old over time, the other constantly reinvents itself, is born again over and over. And over.

About the Artist
Hans Eijkelboom, born in Arnhem in 1949, is a member of a generation of Dutch artists who played a key role in the establishment of conceptual photography in Continental Europe. His initial forays into photography had a strong performative bent, and almost exclusively involved one type of autoportraiture or other—“the presentation of self in everyday life,” in Erving Goffman’s felicitous phrase. These works were clearly informed by the efflorescence of 1970s Dutch performance art, all the while keying into the emerging discourse of post-1960s identity politics—the photo triptych De Drie Communisten (The Three Communists, 1976) presenting the artist dressed up as a Marxist, Leninist, and Maoist respectively, speaks volumes in this regard—though infused with a deadpan sense of humor all too often lacking in subsequent identity-based art practices. (Comedy, in his ongoing encyclopedic project, is a function of the illusion that dress cannot ever guarantee true distinction.)