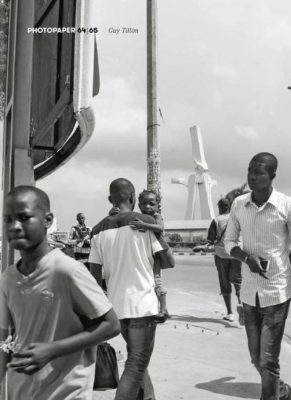 In Dar es Salaam and Abidjan I indulged a simple idea that if you’ve ever been a photographer, I’m sure has crossed your mind: and that is to combine elements from different frames into one picture. I’ve spent years on street corners, and walking streets trying to convey just ordinary scenes, little daily events that happened by the million. And yet, a part of me wanted to capture something out of the ordinary, or rather something so particularly ordinary that it had effortless grace and an effortless path to oblivion. Which always seemed so extremely difficult and sometimes tortuous. You’d spend hours and days, and then hate yourself because you just couldn’t do it, and photographers you admired were seemingly doing it all the time. So I constructed the images. Because I can. Because I wanted to see what they looked like. You note a little defensiveness in my tone there? My former practice of photojournalism disapproved of this kind of construction, saw it as disingenuous: a single moment should be able to be plucked out from its journey to oblivion and be consecrated as ‘something that happened’. I suppose it’s a play on with time really. The scenes all happened, not in that sequence maybe, but with another throw of the dice, who knows?- Guy Tillim
(source: https://photopaper.world/portfolio-item/64-65-guy-tillim/)

About the Artist
Guy Tillim was born in Johannesburg in 1962 and lives in Vermaaklikheid in South Africa. He started photographing professionally in 1986, working with the Afrapix collective until 1990. His work as a freelance photographer in South Africa for the local and foreign media included positions with Reuters between 1986 and 1988, and Agence France Presse in 1993 and 1994. Tillim has received awards for his work, including the 2004 Daimler-Chrysler Award for South African photography; the Leica Oskar Barnack Award in 2005; the first Robert Gardner Fellowship in Photography from the Peabody Museum at Harvard University in 2006; the Quai Branly Photography Residencies in 2015, and the Henri Cartier-Bresson Award in 2017. His work was included in Documenta 12 in 2007, the São Paulo Biennial in 2006, and the touring exhibition Africa Remix (2004-2007), presented at the Centre Pompidou in 2004.
(source: https://photopaper.world/portfolio-item/64-65-guy-tillim/)