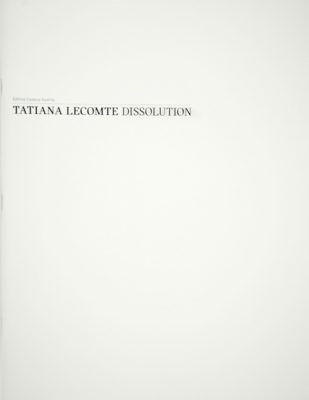 Tatiana Lecomte’s photographic oeuvre is certainly among the most wilful and challenging from a younger generation of artists in Austria. She mainly makes use of found images or existing reproductions, which she enlarges in an analogue procedure and processes. In this way, she brings the grid pattern of the original reproduction, the surface of the objects and the grain of the enlargement into an oscillating relationship, in which object and reproduction virtually coincide. In addition, the reproductions she uses refer again and again to (traumatic) historical events (war, annihilation, people and society as a laboratory for power and violence), the significance of which is essentially unrepresentable and which cannot be reduced to replicable elements of reality. For this reason, Lecomte’s work has to be read as more political than aesthetic: as querying photographic representation, as doubt in the appropriateness of visualisation, i.e. as image politics undermining the codifications of meanings. Where is the boundary of photographic representation to be set, what happens between image and reality? Hardly anything in Lecomte’s work is to be seen as a trace of reality, but everything has to do with traces of this reality―as the result of a photographic praxis itself.