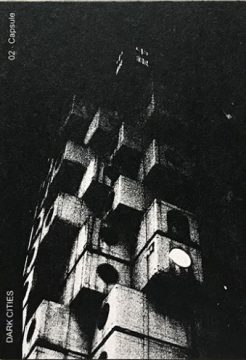 Dark Cities is a self-published project in a thin-cardboard folder containing 3 books that are 3 perceptions of Singapore, Tokyo and Seoul through the lens of a specific and unusual location: a carpark (01 – Carpark), a run-down tower (02 – Capsule), an old city quarter (03 – Euljiro). The original training as an architect of the artist Shyue Woon is very present in this triptych that also carries a dark atmosphere. Shyue Woon grew obsessed with the tower & its madly visionary architect – by bringing the future into the present, and the tragedy of not able to dictate the evolution once human/economics imperfection intervenes.  He attempts to construct an imaginary Kafkaesque narrative on someone (The architect) being trapped in his own tabula-rasa, trying to escape for the crumbling meta-textual stage of his own creation. It seems that we are exploring the Tower’s ‘consciousness’ as turning pages. We learn about the days of the Tower. However, what we see are not objective facts; It is just an imagination based on our own experiences. By exercising our imagination, we can see even the dream capsuled in the Tower.
(source: https://ascenseurvegetal.com/en/photobook/1622-dark-cities-signed.html)

About the Artist
Shyue Woon (b. 1975), trained as an Architect, uses photography as a tool to explore subtext in the built environment. In his daily practice as an architect, he turns aspirations and dreams into constructible reality. At night, he reverses the process – deconstructing reality and spaces into fiction and figments of imagination. Shyue Woon’s debut photobook “Dark Cities” won the inaugural First Draft Award by THEBOOKSHOW. Woon was also selected as an artist in Mt Rokko International Photography Festival Emerging Photographers Showcase 2016 and his work has been exhibited in Turkey, Japan, Ukraine, Australia, Cambodia, Malaysia and Singapore. His works were also selected for +50, a collective for Singapore’s Photographers; and “Thank you, Mr Lee” (2015), a book tribute to late LKY.
darkcitiestrilogy.com
(source: https://www.darkcitiestrilogy.com/about)

About the Publisher
Invisible Photographer Asia (IPA) | 亞洲隱形攝影師 was founded in 2010, and since then has grown into a leading and influential platform for Photography and Arts in Asia. We participate vigorously in the movement of Photography in Asia through talent showcases, events and exhibitions, publishing, workshops and education, and community outreach. Since inauguration, IPA has partnered with organizations such as The Angkor Photo Festival, Photo Bangkok Festival, Photo Kathmandu, Objectifs Centre for Photography and Film, National Museum Of Singapore, Singapore Heritage Society, SONY Electronics Asia, and Leica Camera Asia Pacific.
invisiblephotographer.asia
(source: https://invisiblephotographer.asia/about-2/)