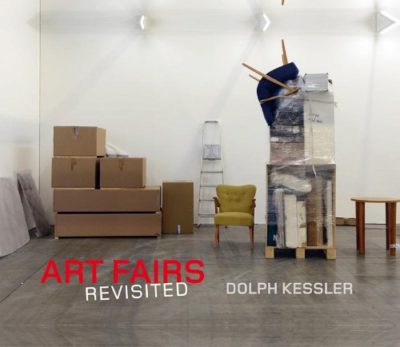 The new photo book “Art Fairs Revisited” by Dolph Kessler is a sequel to the 2009 photo book Art Fairs. His approach is now art fairs during construction and (sometimes) during dismantling.
He is now mainly interested in the curious phenomenon that sometimes during the construction and dismantling of art fairs spontaneous “installations” arise that have their own beauty or are interesting in some other way. They are photos with common ground and references to modern visual art.
Moreover, they are not only a formal-aesthetic finger exercise in (sometimes almost abstract) compositions of the image plane, but also an ironic commentary on the art business that inadvertently continues to produce ‘art’, even before and after closing time.

About the Artist
Dolph Kessler (Amsterdam, 1950) has been a documentary photographer since 2005. He studied urbanism at Delft University of Technology and presently lives in Friesland in the north of the Netherlands.  He worked as a regional planner for the province of Friesland (1976-1982), as a municipal councillor for the town of Leeuwarden (1982-1991) and organized study tours (1995-2003). From 2003-2006 he studied at the Fotoacademie Amsterdam. He is now a professional photographer working mostly in a documentary tradition.
dolphkessler.nl

About the Publisher
It is the intention of Mauritsheech Publishers to assist the makers who self-publish with them, by sharing their own experiences (and thereby the experiences of previous clients also). The company aims to fill the gap that has arisen between commercial publishing and self-publishing; they want to serve as an umbrella figurehead for self-publications. You could also call it a community for creators of self-published books.
Mauritsheech Publishers is the imprint of photographer Dolph Kessler who has published books for years independently.
mauritsheech.blogspot.com