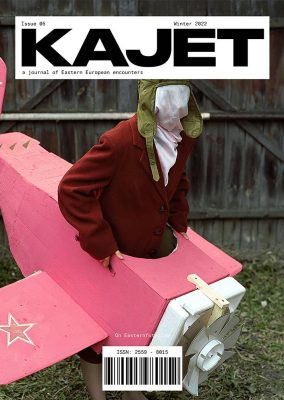 Over the last three decades of increased precarity and insecurity, the act of remodelling the future has disappeared in the turbulent transformations that took over Eastern Europe. The very notion of imagining a better future was relegated into a worn-out ideal, widely regarded as a by-product of privilege, or removed entirely from the collective imagination. Who has time to think about the future in the age of semiocapitalism, when ideology has pervasively leaked into all forms of existence? Juxtaposed between utopia and absurdity, even the possibility of fantasising about what is to come has been discarded and nullified. The main intention of the fifth issue of Kajet Journal is to tentatively sketch a re-conceptualisation of Eastern Europe’s future: to formulate a novel prototype of Easternfuturism, one that is by no means exhaustive but should be read as an invitation for new cultural, artistic, and activist entities to develop their own understandings of the concept.
(source: https://kajetjournal.com/2022/02/01/kajet-issue-05-on-easternfuturism/)

About the Jornal
The ethos of Kajet is to bring unexplored, neglected Eastern European narratives to the fore. Aiming to merge scholarly interests with artistic practices, Kajet provides a platform for academics to co-exist with artists, where intricate processes of acquiring (and redistributing) collective knowledge are stimulated to take place. Whilst approaching scholarly interests with an informal overtone, Kajet follows an interdisciplinary approach. As a platform where academia and art are equally embraced, we are foremost concerned with challenging stereotypes, shifting perspectives, and documenting lived experiences.
(source: https://kajetjournal.com/about/)

About the Editors
Petre Mogoș is a writer and co-editor of Kajet, a Bucharest-based journal that proposes an internationalist exploration of Eastern Europe. In an attempt to decolonise the imagination and thought of the region, his work approaches the complicated relationships between East and West, periphery and centre, as well as the legacy of the past and the possibilities of the future.
(source: https://kajetjournal.com/thefutureof/nostalgia/notes-on-the-future-of-nostalgia-petre-mogos/)

Laura Naum (b. 1989, Bucharest), founder and co-editor of the magazine Kajet, studied Cultural Economics at Erasmus University in Rotterdam. She is proud of her aromatic roots and is particularly interested in the ethnic melting pot that characterizes Eastern Europe, the cultural politics of minorities, and the underrepresentation of these unwanted nomads. She would like to explore her family’s past and her mixed Eastern European ancestry more often.
(source: https://www.burg-huelshoff.de/en/programm/kuenstlerinnen/laura-naum_

About the Publisher
Dispozitiv Books is an independent bookshop specialised in art books and magazines. As a publishing studio, it seeks to carve out new meanings to the relation between theory and image, between the experiences of the past and the possibilities of the future.
dispozitivbooks.com
(source: https://dispozitivbooks.com/about-contact/)