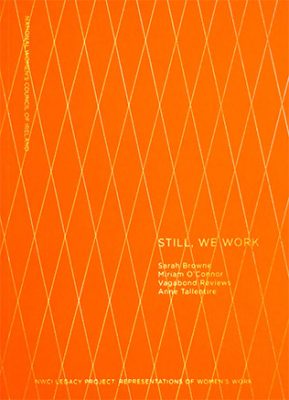 National Women’s Council of Ireland (NWCI) is delighted to present Still We Work, an exhibition featuring artists Sarah Browne, Vagabond Reviews, Miriam O’Connor and Anne Tallentire. The exhibition has been devised as part of the NWCI Legacy Project developed by project curator Valerie Connor for the NWCI to mark their 40th anniversary year and is funded by the Atlantic Philanthropies. The artists were asked to reflect on contemporary representations of women’s work in the context of the centenary of the 1913 Dublin Lockout. They have responded by making new works addressing women’s experience of precarious contemporary working conditions and the invisibility of much of ‘women’s work’.

From, in and with by Anne Tallentire consists of a 24 etched wood panels & 24 c-type photographs in a self-contained box. These correspond with 24 specially commissioned ‘100 word’ texts in the exhibition publication by women working in architecture: Ruth Morrow, Jane Rendell, Gráinne Hassett, Ellen Rowley, Culturstruction and Alice Casey – they describe photographs (we are never shown) of buildings located between the NWCI offices and the site of Jacob’s biscuit factory in 1913, where locked out women remained on strike the longest.

The Legacy Project by Miriam O’Connor comprises a unique exhibition print and an 80-page Photobook that includes images of workspaces used by NWCI and member groups, including some groups that struggle for media visibility and operate in a very transient way, meeting in improvised settings. The artist also looked at photographs kept by the NWCI – some taken for PR purposes and others taken more informally by members at events and gatherings.

Peripherals by Sarah Browne features reflections of the economy and language of women’s work in a short video with a scripted a voice over and professional hand model. We see her handle small sculptures made of aluminium, silicone, glass, and scented soap: recognisably things women handle in the course of a day’s work. The artist’s pages in the exhibition publication draw on further ideas about the embodiment of certain kinds of work by women.

The (In)Visible Labour Factorium by Vagabond Reviews (artist Ailbhe Murphy and researcher Ciaran Smyth), is a collection of texts with photographs, that have been made for or shared during ‘visibility clinics’ held in Dublin, Donegal and Limerick. The next will take place in Galway. Working with small groups from the NWCI members they uncover facts otherwise overlooked by mainstream evidence based research and record them as a series of photo-text panels. As the exhibition travels, more additions will be organised.

About the Artists
Valerie Connor works in the visual arts alongside artists and commissioners who are preparing new work, projects and exhibitions. Connor writes for artists’ publications. With the Arts Council of Ireland and assist the visual arts team as an external adviser. Specifically, on funding and policy for visual arts organisations.
valerieconnor.com

O’ Connor also draws on farming diaries, notes and exchanges as a means of exploring the past and at the same time opening up new perspectives on present circumstances. These traces of everyday life have acted as the catalyst for the production of a series of logbooks which catalogue various activities characteristic of her new life. Through detailing daily farming tasks and domestic duties, compiling inventories and anecdotes, this approach of logging and indexing reflects an effort to regain some semblance of order and a means by which past and present might begin to align or reconcile in some way.
miriamoconnor.com

Sarah Browne is an artist based in Ireland concerned with spoken and unspoken, bodily experiences of knowledge, labour and justice. Her practice involves sculpture, film, performance and public projects, often in collaboration with others.
sarahbrowne.info

Co-founded by Ailbhe Murphy and Ciaran Smyth, Vagabond Reviews is an interdisciplinary platform combining socially engaged art and research practice. As artists and researchers, they are interested in engaging broader publics in alternative forms of cultural participation and knowledge production. As an interdisciplinary platform, Vagabond Reviews seeks to bring the two registers of art and research together by developing creative and collaborative models of knowledge production, representation and distribution through a combination of art practice, research strategies and critical review.
(source https://www.hydeparkart.org/directory/vagabond-reviews/#:~:text=Co%2Dfounded%20by%20Ailbhe%20Murphy,cultural%20participation%20and%20knowledge%20production. )

Irish artist Anne Tallentire (born 1949) studied Fine Art Media at the Slade School of Art. Often documenting the actions of both herself and others, Tallentire’s work is concerned with interrogating the apparatus of mapping and naming, and the relationship between the specific and the general, social control and urban occupations.
Tallentire has exhibited in Ireland and Europe, including a solo exhibition at IMMA in 2010. She is currently a Professor of Fine Art at Central Saint Martins College of Art and Design, London.
(source https://imma.ie/artists/anne-tallentire/)
annetallentire.info

About the Publisher
The National Women’s Council is the leading national representative organisation for women and women’s groups in Ireland, founded in 1973.
nwci.ie

Representations of Women’s Work – The Legacy Project In the anniversary year of the 1913 Lockout, National Women’s Council of Ireland initiated the Legacy Project to challenge conventional thinking about women’s work and how it is represented.
(source https://www.nwci.ie/discover/what_we_do/womens_economic_independence/representations_of_womens_work)