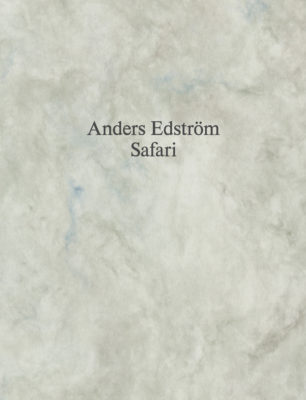 in Anders Edström’s Safari photographs, a slow, deliberate looking, a looking focused on a singular subject, a looking that by all appearances holds the outside world at bay, nonetheless reveals an image of openness one might better expect from street or landscape photography, genres bent by time, context, event, and change. But what changes in these Safari pictures? Do they have time or context? What is their world?

About the Artist
Anders Edström (b. Sweden, 1965) is best known for his experimental, avant-garde fashion images. Upon moving to Paris in 1990, he began a long-term collaboration with the designer Martin Margiela, and regularly worked for the cutting-edge Purple magazine. Subverting the typical format of fashion imagery, Edström’s photographs often capture models in unassuming, everyday situations, such as drinking coffee backstage. Edström’s work has been exhibited at venues such as New York’s Artist’s Space, the Moderna Museet in Stockholm, Museum für Moderner Kunst in Frankfurt, Boston’s Institute of Contemporary Art, and the Centre Pompidou, among many others. He has published several monographs, including Two Houses (2011), Safari (2010), Waiting Some Birds a Bus a Woman/Spidernets Places a Crew (2004), and Buckshot Lexicon.

About the Publisher
Nieves is an independent, one-man publishing house based in Zurich, Switzerland. Founded in 2001, by Benjamin Sommerhalder, an artist with a background in graphic design, Nieves’ focus is on publishing Artists’ Books and Zines.