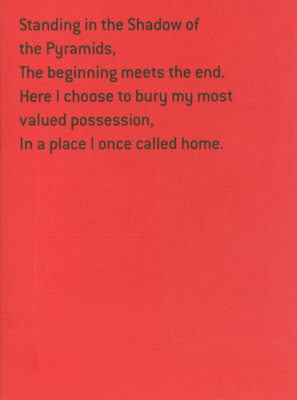 Post-Script revisits Laura El-Tantawy’s journey through Cairo’s iconic Tahrir Square five years from Egypt’s momentous revolution and one year after the release of her self-published monograph, “In the Shadow of the Pyramids.” This pocket-sized publication features previously unpublished images and written reflections where El-Tantawy takes readers behind the photographs and into the thoughts and emotions that went into making them. It can be considered a reflection on the act of photography itself. The publication is released to coincide with the Deutsche Börse Photography Foundation Prize 2016, for which “In the Shadow of the Pyramids” is nominated.

About the Artist
Laura El-Tantawy is an Egyptian photographer. She was born in Worcestershire, England to Egyptian parents. She attended high school in Saudi Arabia, started university in Cairo, Egypt and completed her degree in the US. Living between East and West for much of her life has been a source of both immense enlightenment and considerable anxiety — contemplating notions of home, identity, culture and ultimately, ‘the self’. It is through the allure of photography as an artistic medium of limitless boundaries that she chooses to explore these themes. With her characteristically painterly and impressionistic eye on reality, Laura explores social and environmental issues pertaining to her background.

About the Publisher
RRB Photobooks is a photobook seller and publisher based in Bristol UK. RRB Photobooks publishing arm was established in 2015. They mainly publish overlooked, forgotten and underappreciated British photographers of the 1970s and 80s.