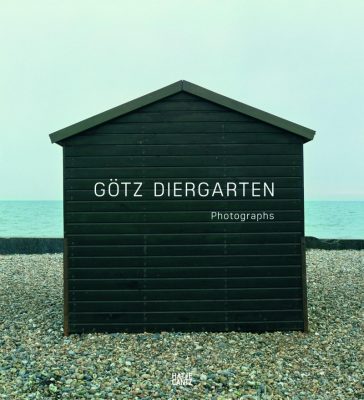 In his series featuring German façades, French beach cabanas, and British spa architecture, Götz Diergarten examines the outward appearance of different types of everyday buildings. Following in the footsteps of theBecher School , Diergarten’s works are conceptually rigorous, with a documentary-style straightforwardness. Diergarten’s originality, however, lies in the fact that he adds color as a dimension to this austere concept. In his photographs of standard beach cabanas, it is the color that expresses a sense of originality and uniqueness.

For our Collector’s Edition, Diergarten has selected a diptych of two beach cabanas from his series England, which was shot in West Sussex, in the south of England. In their size and shape, the little cabanas bring to mind Diergarten’s other series of French and Belgian beach architecture. Due to the frontal perspective and austere form, the emphasis is on the typological and the serial nature of the two cabanas. Upon closer observation, however, the viewer realizes that the two buildings have different details—such as the trim along the roof of the white house—and thus each one harbors its own originality and uniqueness.

As is the case in many of his works, the artist is interested “in a certain visual school, in slowing down the way we perceive things, and in raising our awareness of the things that surround us,” as Diergarten said in 2005.

About the Artist
From 1993 to 1998 Götz Diergarten (German, born 1972) studied free arts / creative photography at the Akademie der Künste in Düsseldorf with Bernd Becher. Diergarten was in the last class Becher taught there. After completing his studies he attended the Hochschule für Gestaltung in Zurich until 2000. Diergarten’s photographic themes are everyday architectural forms such as façades, abandoned vacation cottages, swimming pool locker rooms, and subway stations. In his photographic series Diergarten combines the conceptual stringency of the image typology with a narrative eye for the colors and details of the subjects he depicts.
(source: https://kicken-gallery.com/artists/goetz-diergarten)

About the Publisher
Hatje Cantz is a German book publisher specialising in photography, art, architecture and design. It was established in 1945 by Gerd Hatje and has offices in Stuttgart and Berlin. Hatje Cantz Verlag has a backlist of nearly 800 titles.
hatjecantz.de
(source: https://artsandculture.google.com/entity/hatje-cantz-verlag/g1218r9zb?hl=en)