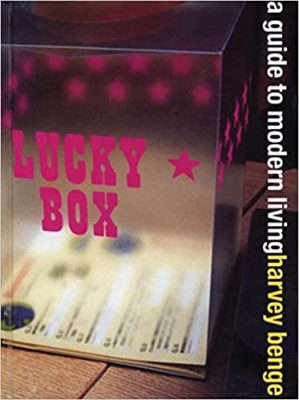 (Black and white version available in the library, under different publisher)

Benge loves to thrust you into no-go-zones… reminds you just how weird the world is when you really start paying attention.

In his quest for the bizarre and the absurd, Harvey Benge continues to scavenge the urban landscape. Lucky Box – A guide to Modern Living is his fifth book and as always Benge thrives on the everyday moments of ordinary life, as he searches for the ambiguities and tensions that lie behind modern urban living. This is a journey of contrast and conflicts – frequently humorous and often deeply disturbing.
(source: https://www.dewilewis.com/products/lucky-box)

About the Artist
Harvey Benge (1944–2019) was a prolific photographer and committed maker of photobooks. Working between Auckland and Paris he published over 70 titles, often in the form of limited editions. Publishers included Dewi Lewis in the UK, Kehrer Verlag in Germany and Super Labo in Japan, as well as Benge’s own imprint FAQ Editions. His photographs have also been shown in public and private galleries in the UK and throughout Europe as well as in New Zealand. He has twice been a finalist in the prestigious Prix du Livre at Arles Photography Festival, France.
harveybenge.com
(source: https://www.harveybenge.com/about)