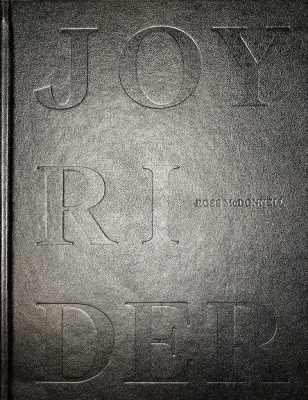 Joyrider is a coming of age story set against the backdrop of the Ballymun housing estate. The book documents rites of passage on the ‘block’: experiences that convert youthful abandon to criminal enterprise. Inspired by societal changes, Ross McDonnell spent several years working in Ballymun as residents were being relocated in anticipation of the complex’s final demolition. The estate, constructed to replace Dublin’s inner city tenements in the 1960s, was a failure from inception. Despite its utopian vision, the lack of planning and infrastructure rendered the area chronically under-developed. Ballymun became an iconic symbol of the city’s underclass, ravaged by successive drug epidemics and inter-generational malaise. Joyrider, now beautifully published in its complete form for the first time, depicts a marginalised youth reclaiming space in the face of this “urban regeneration.” We see, writ large, the forces and tensions that shape and mould us all as young individuals: creation and destruction, inclusion and escapism, environment and identity.
(source: https://www.totallydublin.ie/arts-culture/arts-culture-features/joyrider-ross-mcdonnell/)

About the Artist
Ross McDonnell is a filmmaker and photographer born in Dublin, Ireland. Ross’ early experience of travel and his love of cinema sparked a fascination with image making and storytelling. His work reflects his interest in the open-ended nature of non-fiction and the tensions, inherent in the photographic process, between transience and permanence. He is now based in New York.
rossmcdonnell.com

About the Publisher
Charcoal Book Club is the first and only subscription service for photobooks.
charcoalbookclub.com

There is no information available about Thirty Nine Books.