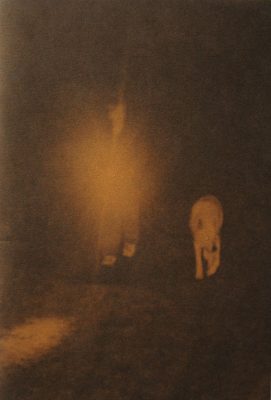 The uncertainty of Ola Rindal’s images grasps the viewer and lures one in to a world of photography free from the notion of instant narrative and representation. Invisible (Pictures for an untold story) is the product of Rindal’s experiments with film, texture, exposure and light. The book is made up of a on-going series of photographs mainly shot at night. By pointing a flash directly into a smoky or fog-filled landscape, the nights’ mystique is brought to bear on the viewer. The works, which could all be described as snapshot-landscapes, upend the standard notion that the mystery of the night lies in its darkness. The obvious playfulness in the technique Rindal has chosen for his particular subject points to a school of analog photography, where the end result is determined by a series of mistakes made along the way. The images for the book are made in the photographer’s childhood village of Fåvang, Norway, where Ola Rindal makes up his base when escaping his home in Paris.

About the Artist
Ola Rindal has had solo exhibitions in Norway, Sweden, Mexico and Belgium and done editorial work for magazines as Purple fashion, Dossier, Rodeo Magazine, I-D and Acne Paper. His last exhibition was at MELK gallery in Oslo in 2010 and previous book published by Hassla books in 2007.
olarindal.com