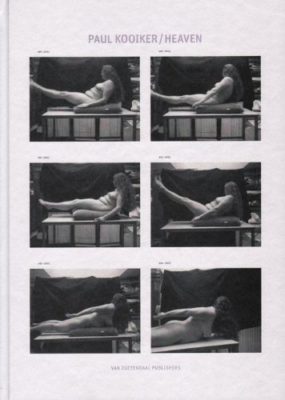 More than 450 polaroids by Paul Kooiker are arranged in spreads that communicate a kind of rhythmic melody, one which consists of images of funerals, churches, cityscapes, fountains and numerous pin-ups and nudes.

About the Artist
Paul Kooiker (b. 1964, Rotterdam) is a Dutch artist based in Amsterdam. Paul Kooiker studied at the Royal Academy of Arts in The Hague and the Rijksakademie van Beeldende Kunsten in Amsterdam. In 1996 he won the Prix de Rome and in 2009 he was awarded the A. Roland Holst Prize for his oeuvre.In the initial phase of his creative process he is a deliberately ‘bad’ photographer, producing a mass of exploratory material that often runs to hundreds of images. He then approaches this material as a visual artist, creating ‘collections’ in the form of three-dimensional installations and photo books.  As well as exhibiting widely in the Netherlands and internationally, Kooiker has devoted considerable attention to the publication of his work, mostly in partnership with publishers.
paulkooiker.com
(source: https://christopheguye.com/artists/paul-kooiker/biography)