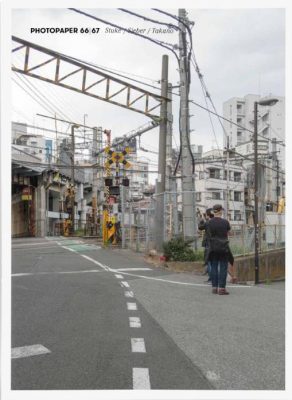 Katja & Oliver: In 2017 we spent a day together north of Mikawashima station, you invited us and showed us around. Actually, it was really close to the area where we stayed in when we came to Tokyo for the first time in 2005; so we were really excited to visit this part of Tokyo again. Why did we go there? What was your interest in this area?

Ryudai: Three years have past since we went there. It was 15th April in 2017. I simply thought that you might not know the eastern part of Tokyo. In my opinion, this area is a forgotten part of Tokyo. I think most people, even ones living there, don’t really want to know it well. They think their area isn’t worth seeing and knowing. I wanted you to know this part of Tokyo. I thought it would be a new Tokyo for you. But you were already familiar with it.

In a way, yes, it felt familiar. But it took some years to understand the divisions between different parts of Japanese cities. We became curious when Japanese friends referred to these kind of areas as ‚Deep Japan‘. What is your understanding of ‚Deep Japan‘? I understand ‚Deep Japan’ as an area left behind by development and so the appearance and way of life of the community continues as it was a long time ago. Some districts in the North-East of Tokyo have a complicated and difficult past which you can still feel. In some parts there are still problems with stigmatisation. We often – not only in Japan – think about landscape and identity, landscape and belonging. How do you think photography can make these questions visible? In order to make these questions visible, a photographer has to have objective consciousness – you just record the target. I said “conscious”, but in this context, it means something unconscious, like an unintended physical reaction. I believe
that camera precisely replicates the photographer’s subconscious awareness because of its mechanical accuracy.

What you have just described: is this also your understanding with your series Kasubaba? Yes, that is correct. »Kasubaba« is not presenting the world as I had seen it befor e, at least prior to photographing it. I think Kasubaba is presenting a world that I became to be able to see gradually with the repeated action of photographing. The city landscape that appeared in »Kasubaba« seems to be disorganized and chaotic but it visualizes the way of thinking of people who relate to the city, namely of Japanese. This is what I think now.

Yesterday we watched Wim Wenders movie about Yoshi Yamamoto The Notebook of Cities and Clothes. It starts with a long statement by Wim Wenders about cities and identity: »What is it, identity? To know where you belong? To know your self worth? To know who you are? How do you recognise identity? […] We live in the cities, the cities live in us… « The connection between cities and identity has been an interest in our work for some time now. We also think the approach of “landscape theory” by Masao Adachi is noteworthy. What is your perspective on this topic?

To be honest and it is a little embarrassing to admit, but I didn’t know about Masao Adachi. I searched online, and found a film he made. So I watched it immediately. It was a film in which Adachi retraced the life of a 19-year-old boy who committed serial murder, describing the sequence of events from when he was born until arrested. The title of the film is A.K.A.Serial
Killer (1969). Is this the same film you pointed out? Regarding this serial killer, I didn’t know about his background and the reason of his crime, so I watched this film without any previous knowledge. Because of this, I was able to purely confront the question whether we could make people connect with a person’s existence only through ’scenery’. The result was – even it was a film with very few verbal explanations and only showed scenery – I was able to watch until the end without getting bored. So I can say it was interesting as a film. On the other hand, if I am asked whether I could understand this criminal, then I couldn’t say for certain… I have a very vague impression. However I doubt even hearing his voice dir ectly that you would fully understand him. In this respect, I feel that this film offered me a rich experiment to consider in terms of transmitting social background of this criminal. I think scenery after all presents consciousness of its social assemblage.

About the Artist
Since 2005 Katja Stuke and Oliver Sieber have been traveling to Japan, working on topics from subculture to surveillance. Since 2011 they are developing an extensive body of work they call the Japanese Lesson. At the beginning it was a single one-channel video, dealing with the visual influence, research and overwealming impressions of the Japanese cities, life and culture. Since then their perspective became more elaborated and several new works have been created: photobooks, different photographic series, dealing with topics like protest and activism, activists and landscape – political landscape.
japaneselesson.boehmkobayashi.de
(source: http://japaneselesson.boehmkobayashi.de/)