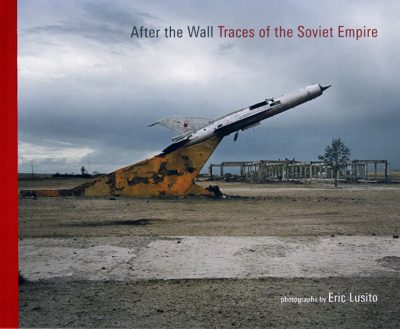 The Berlin Wall was the physical embodiment of the ‘Iron Curtain’ that divided the Soviet world from the West. Once it fell the Soviet Empire itself also began to crumble. At its heart was a military system which extended throughout its territories exerting huge control and influence. There were military bases in every country.

The book includes photographs not only of the bases but also of the murals, posters, books, instruction manuals etc. that Lusito found abandoned. It is a rich collection of work and illuminates the military world of the Soviet Union in a way that is both fascinating and unique.

About the Artist:
Eric Lusito, has travelled throughout the former Soviet Union from East Germany to Mongolia, from Poland to Kazakhstan in search of these former Soviet military bases and his photographs are an extraordinary record. As the Union crumbled many bases were simply abandoned. The military departed but much else was just left behind. Lusito discovered everything from gas masks to propaganda posters, books and magazines, instruction manuals and personal photographs. But it is the buildings themselves which are the most resonant symbols of the fall of a once powerful Empire. A lecture hall is laid out with chairs ready, and theatre spotlights still mounted on the walls, yet the ceiling has begun to collapse; a swimming pool is full of water but this is stagnant water unchanged for years. And throughout there remain symbols of the old regime – murals of heroic deeds and national glories, photographs of political and military leaders, posters exhorting young soldiers to give their all for their motherland.
ericlusito.com

About the Publisher:
Dewi Lewis Publishing is a partnership owned and run by Caroline Warhurst and Dewi Lewis.
Founded in 1994, its photography list has an international reputation and includes books by leading British and international photographers such as William Klein, Martin Parr, Simon Norfolk, Fay Godwin, Tom Wood, Sergio Larrain, Frank Horvat, John Blakemore, Paolo Pelegrin and Bruce Gilden. The aim of the company is to bring to the attention of a wider public, accessible but challenging contemporary photography by both established and lesser known practitioners. The company has a worldwide distribution network and is recognised as one of the leading photographic publishers in the world. It publishes around 20 new titles each year.
dewilewis.com