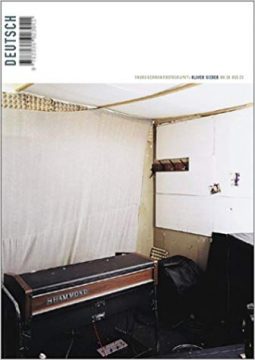 This second volume in the series “Deutsch” offers a glimpse into the conceptual oeuvre of the photographer Oliver Sieber. One body of work focuses on contemporary youth culture with its use of retro-style fashions, while another series depicts the unpopulated practice rooms of musicians.

About the Artist
Oliver Sieber studied photography in Bielefeld and Düssseldorf. Since 1999 he has worked with Katja Stuke on Frau Böhm, a photo project in the form of a magazine, see frau-boehm.de. Sieber’s work usually takes the form of series and he is fascinated by the subject of identity and the phenomenon of young people and their subcultures. This led to the series SkinsModsTeds, B-Boyz B-Girlz, 11Girlfriends and Boy meets Girl. In 2006 he spent time in Japan for an artist in residence program, where he made the series J_Subs as well as character thieves, for which he photographed young people dressed up as their favorite manga characters. Over the past few years exhibitions of his work have been held at, among others, the Photographers Gallery London, the Photographische Sammlung SK/Stiftung Kultur in Cologne, the National Museum of Photography in Copenhagen, the Photo Espana Festival in Madrid, your Gallery in Krakow and Fotomuseum Winterthur. Sieber has published a number of books. The latest two are based on his work character thieves an imaginary club.
(source priskapasquer.art/oliver-sieber)

About the Publisher
Kruse Verlag is a German publishing house that specialises in therapy / coaching and non duality books.
kruseverlag.de