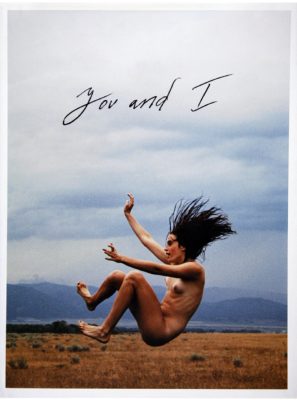 You and I
Ryan McGinley
Twin Palms
English and French

This is Ryan McGinley’s first retrospective monograph. McGinley has selected the best photographs from his first decade of work. Ryan McGinley makes large-scale colour photographs of his friends, a group that forms part of New York’s Lower East Side youth culture. He uses photography to break down barriers between public and private spheres of activity. His subjects are willing collaborators: drawn from skateboard, music, and graffiti subcultures, they perform for the camera and expose themselves with a frank self-awareness that is distinctly contemporary. The results form a portrait of a generation that is savvy about visual culture and acutely aware of how identity can be communicated through photography. This work signals a departure from the urban youth culture images for which he is best known; he has been working in natural settings outside New York City, creating specific situations for his subjects to lose themselves in the moment. McGinley embraces nature as a site of freedom and captures a sense of buoyancy and release.
(source)

About the Artist
Ryan McGinley (October 17, 1977) is an American photographer living in New York City. McGinley began making photographs in 1998. In 2003, at the age of 25, he was one of the youngest artists to have a solo show at the Whitney Museum of American Art. He was also named Photographer of the Year in 2003 by American Photo Magazine. In 2007, McGinley was awarded the Young Photographer Infinity Award by the International Center of Photography. In 2009, he was honoured at The Young Collectors Council’s Artists Ball at the Guggenheim Museum. A 2014 GQ article declared McGinley, ‘the most important photographer in America.’
ryanmcginley.com

About the Publisher
Twin Palms Publishers and Twelvetrees Press produce some of the finest art and photography books available. Beautifully designed and printed, the books have never ceased impressing viewers, either for challenging and provocative content, or for their sheer beauty as objects. We hope to present an artist’s finest work in books whose beauty will be evident to those who appreciate the art of fine book making. We feel the books have a look and feel that makes them unique. High quality papers and printing, small print runs, and award-winning design assure the long-lasting value and collectibility of each volume.
twinpalms.com