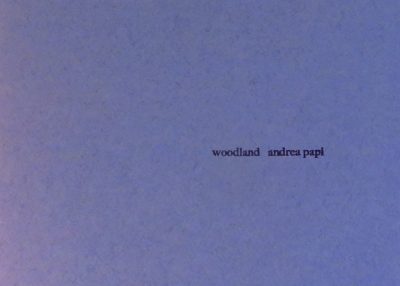 Woodland available for viewing on Vimeo.

The human relationship with Nature is an approach to the Infinite, to the immensity that horrifies and attracts us at the same time. In the Critique of Judgement, Immanuel Kant explains  the  relationship  with  the  hostile  nature through the concept of the Sublime, which is intended as the feeling that arises in ourselves from something adverse and that the human being, in his finiteness, cannot control but to whom he feels strongly attracted and galvanized at the same time. Since the soul is at one time seduced and repulsed by nature, the pleasure of the Sublime is defined as a “negative pleasure”.

Nowadays we consider the wood as an uninhabited, barely outlined place. An unexplored space to be afraid of with its vegetation left to an uncontrolled growth. Traditionally the wood used to be on the contrary a place of intervention where to pay attention: the central cornerstone of folk stories. The wood has, in fact, a rich symbolic value: it is generally considered as the place of the non-culture and magic. A mysterious inhabited by witches, fairies and animals of all kinds. From the imaginary point of view one should bear in mind all the examples  taken from literature and cinema. Intended as a sort of beyond in reference to the inside of a house, it is the Irrational, the eerie Outside itself that hides dangers and injustices, where runaways find refuge and the animals are left to their nature. In the ancestral traditions studied by ethnologists and anthropologists, the wood represents the place of the elsewhere where rites of passage, of outer and inner journeys, of going out and coming back take place.

There is no fairy tale that does not include a journey into the wood. It is generally a journey that covers every stopover as the expression of the most hidden anguishes that the human being has to overcome.

Two places are essential to the background of the fairy tale, resembling each other in being both obscure and mysterious: the wood and our mind. We are obliged to face ourselves through the tangle of branches and bushes, with some sort of skyline circumscribed from all perspectives and an apparent repetition of the visual line. To observe without being seen requires a thinking process,  self-detachment and a new understanding of our own attitude.

In these places (often located within the urban fabric), where there is no trace of human intervention, the passage follows undisturbed  its  course  of  life/death/rebirth.  The  types  of vegetation having appeared over the decades resemble to living architectures that have come to life from one to the other and in some cases have built out-and-out barriers, or unexpectedly have opened themselves tracking a path.

The research of Woodland wants to enquire whether it’s more dangerous to anchor oneself to those rituals and certainties foreseen in the social living or to always strive for something new and unknown doesn’t bring inevitably to loose oneself in what is, by its nature, unfathomable and greater than us. The sequence of photos doesn’t offer shelter to the spectator (who is invited more to be already inside rather than taking part into it) but it projects him in a timeless place. The photographic medium records something that exists beyond the observer putting ourselves in a state of pure contemplation: we are face- to-face to a primordial dialogue where the human being tries to regain the ground noise of the birthplaces of civilisation. Everything ceases precisely where the footsteps on the grass, the paths in the fog, the trees covered with snow, have the omnipresent pitfall of the unknown and the dark as background.

About the Artist
Andrea Papi is a Rome based, Italian independent photographer.
andreapapi.biz

About the Publisher
Monkey Photo is a four-handed photographic project by Alessandro Ciccarelli and Danilo Palmisano, currently working on periodical photographic ‘zines.
monkeyphoto.org