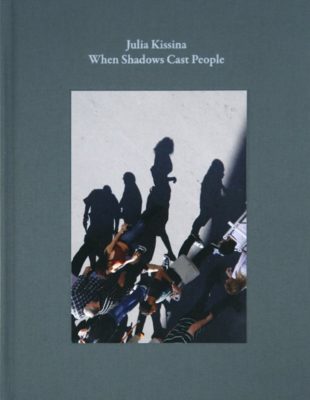 Julia Kissina’s photographs often are populated with figures, which scare us. Bodies are deforming, children develop additional arms and legs and her ‘freaks’ seem to come from another galaxy, even when they look like people. Now the photographer has discovered another species directly in front of her front door. In her pictures Julia Kissina creates a world in which the common visual experiences fail: There is no “up” and “down”, three-dimensional objects are perceived as flat, gravity is reversed. Like a ride on a carousel the observer loses his spatial orientation, the reeling sight directly ends up at the strange figures, which dominate the scenery. Julia Kissina has taken the photographs of the series “When Shadows Cast People” from her balcony in Berlin in the last three years. The proportions are reversed with the help of this perspective: The shadows in her pictures have become independent from the people and perform their spectacle, in which the people only play a minor part, mostly unnoticed.
(source: https://peperoni-books.de/buecher0.html)

About the Artist
Julia Kissina is an artist and writer. Born in Kiev, she studied dramatic writing in Moscow, then moved to Germany, graduated from the Academy of Fine Arts in Munich and taught as a Professor of New Media and Art Photography. In 2000 Julia Kissina herded an actual flock of sheep into the Museum of Modern Art in Frankfurt as part of a performance. In 2003 she curated the Art & Crime festival in Berlin, and performed in a German prison. In 2006 she created The Dead Artist’s Society, which held séances to conduct Dialogues with Classics such as Duchamp and Malevich. A member of the Moscow Conceptualist movement and Russian literary underground avant-garde (Samizdat), Julia Kissina is the author of several novels and story collections translated throughout Europe. Suhrkamp Verlag, Germany has published her novels Springtime on the Moon, Elefantina, and a recent anthology of contempoprary Russian prose «Revolution Noir», which she edited. In 2018 she created Urban Dictionary, a literary festival in Berlin, that brought together writers from New York and Berlin. Julia Kissina lives in Berlin and New York City.
juliakissina.com

About the Publisher
Founded by Hannes Wanderer in Berlin in 2004, Peperoni Books is dedicated to contemporary photography and the publication of high-quality photobooks.
peperoni-books.de