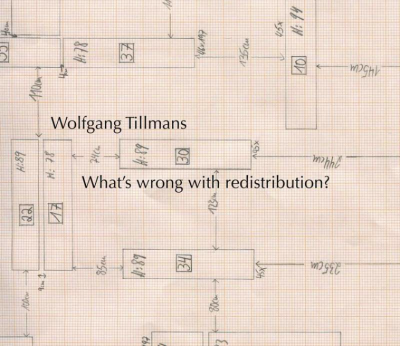 Published in conjunction with the Hasselblad Award 2015.
Texts by Dragana Vujanovic, Louise Wolthers and Tom McDonough.

Tillmans observed the paradigm shift that defines politics today early on. The scope and complexity of this project become apparent for the first time through this book, the second we have published, after “manual” in 2007, dedicated to this set of works. Over 320 pages, printed using a high-resolution technique, Tillmans presents an alternative chronology of the present. Far exceeding his original and main medium of photography, he juxtaposes a variety of contrary opinions, statements and comparisons on recurring table formats. This book gives an overview, through lavish reproductions, of this new form of collage, in which picture, text and object ‘are only kept in place by their own weight.’ An essay by Thomas McDonough, Professor for Art History at Birmingham University, New York, places Tillmans’ project within the context of twentieth-century collage, from Hannah Höch to Robert Rauschenberg.
(source: https://www.crousel.com/en/url_article/wolfgang-tillmans-whats-wrong-with-redistribution-2015)

About the Artist
Wolfgang Tillmans (b. 1968, Remscheid, Germany) is one of the most accomplished and widely celebrated artists working today, recognised for major contributions to the development of contemporary photography in terms of subject matter, production, scale, presentation and methodology. His diverse body of work is distinguished by observation of his surroundings and an ongoing investigation of the photographic medium’s foundations. Tillmans was the first photographer – and also the first non-British person – to be awarded the Tate annual Turner Prize. He has also been awarded the Hasselblad Award, the Royal Photographic Society’s Centenary Medal, the Royal Academy Summer Exhibition’s Charles Wollaston Award, The Culture Prize of the German Society for Photography, and is an Academician of the Royal Academy of Arts, London. Tillmans lives in Berlin and London.
tillmans.co.uk
(source: https://www.moma.org/artists/8044 , https://imma.ie/whats-on/wolfgang-tillmans-rebuilding-the-future/)

About the Publisher
Walther König is one of the most respected art book publishers in the world, they are also the proprietor of Germany’s leading art bookstores, notably the flagship shop in Cologne. Key historical publications include Wolfgang Tillmans: Manual and the ongoing Hans Ulrich Obrist Conversation Series, while many of the imprint’s most seminal books, which originated with König, have been co-published in America by D.A.P. These include Gerhard Richter: Atlas, Gerhard Richter: Writings, Raymond Pettibon: The Books, Donald Judd: The Early Works, 1956-1968 and How You Look at It.
buchhandlung-walther-koenig.de
(source: https://www.artbook.com/waltherkonigverlag.html)