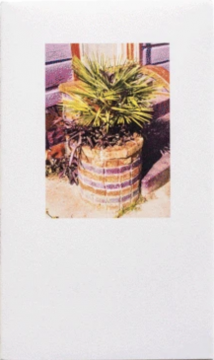 Walking in Place 1: New Orleans is the first in a series of standalone books by Los Angeles-based photographer Mike Slack, each taking in a different city, town or geographical locale. In this volume, first published in 2016, Slack records various points of reference on a five day meander through The Big Easy, creating an inner travelogue both meditative and playful. Driven by an almost unconscious process of seeing, recording and cumulation, his gaze settles on architectural details, local flora, street ephemera, and the curious neighborhood cats that cross his path. Led by his keen eye for street-side formalism, and a canny sensitivity to the poetics of light and tonality — and their unlikely urban iterations and combinations — Slack has crafted another telling contribution to what has emerged as a genuinely unique photographic language. The book itself assumes the form of an elegant, pocket-sized paperback — a non-linear, non-verbal journal for the perpetual wanderer.

About the Artist
Mike Slack lives and works in Los Angeles, CA. The author of The Transverse Path, the Polaroid trilogy OK OK OK, Scorpio, and Pyramids, as well as High Tide and Shrubs of Death, his work has appeared in Harper’s, GOOD, the New York Times, the Los Angeles Times. His photographs are in the permanent collection of the Los Angeles County Museum of Art.
mike-slack.com

About the Publisher
Perimeter Editions is the award-winning publishing imprint of Melbourne-based bookstore Perimeter Books and distribution house Perimeter Distribution. Releasing its first publication in 2012, Perimeter Editions’ focus rests on publishing autonomous books in close collaboration with photographers, artists, curators and writers. Its publications exhibit a criticality and sensitivity to content and form.
perimetereditions.com