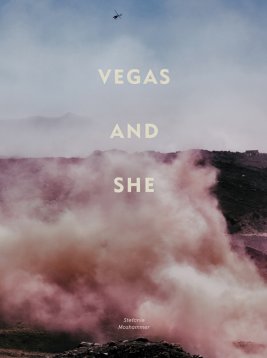 In her in-depth exploration of Las Vegas, young Austrian photographer Stefanie Moshammer created an extensive series of photographs which were compiled into this photobook published by FOTOHOF edition. Las Vegas is a ‘Disneyland for adults’, an entirely artificial city nicknamed Sin City set in the Mojave Desert and once renowned as a Mafia stronghold, its existence a sort of brightly coloured parallel universe alongside the rest of America. Las Vegas is an epicentre of oddities, bereft of evolved urban culture or traditional legacy, a settlement agglomeration doubling up as a gigantic amusement park. And it was here, in this controversial setting, that Stefanie Moshammer spent two months with her camera working on ‘Vegas and She’, a fascinating – and darkly disturbing – portrait of this art(ificial) city and its inhabitants.

About the Artist
Stefanie Moshammer was born in Vienna 1988. She graduated from Fashion School Vienna and received a Bachelor of Arts in Graphic Design & Photography at University of Art and Design in Austria. Afterwards she attended the BA in Advanced Visual Storytelling at the Danish School of Media and Journalism.
stefaniemoshammer.com

About the Publisher
FOTOHOF editions has been publishing books and catalogues by Austrian and international photographers since its foundation in 1981. Over 200 mainly monographic titles have been published so far, generating a publishing house with international distribution channels.
fotohof.net