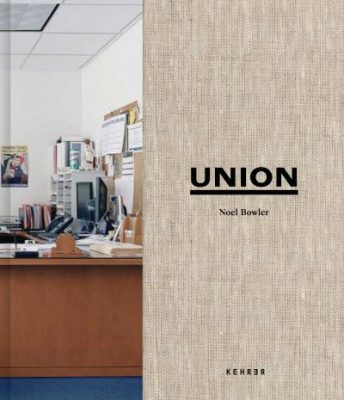 Made over a four year period defined by economic uncertainty, increased worker insecurity and the decline of traditional work practices, Union responds to how the institutions of organised labour, designed to protect workers from exploitation in the nineteenth century, have responded to the crisis of today. Bowler’s photographs document the interior spaces of trade union offices in 14 different countries, all with distinct cultural and historical differences and provide a glimpse into the normally unseen spaces where the decisions and policies are created that affect so many. Combining photographs of these interior spaces with portraits of union leaders, Union is a journey through an anxious world where the apparent certainty of the past faces an unknown future.
(source: http://oars.uos.ac.uk/1840/)

About the Artist
Noel Bowler is a Photographer and Educator. Born in Ireland (b.1978). He holds an MFA in photography from University of Ulster, Belfast and a BA (Hons) degree in Documentary Photography from the University of Wales, Newport. His work has been exhibited worldwide including New York Photofestivel and Les Recontres d’Arles, with recent solo exhibitions in Gallery of Photography, Ireland and Impressions Gallery, England. Bowler has nominated for the Deutsche Borse Photography Prize in 2011 and for the Prix Pichtet Photography Prize in both 2012 and 2015. His most recent body of work Union will be published by the Kehrer Verlag in 2015. He is currently a Lecturer in Photography at University Campus Suffolk.
noelbowler.com
(source: https://newirishworks.com/project/noel-bowler/)

About the Publisher
Founded in 1995, Kehrer Verlag Heidelberg Berlin specializes in books in the fields of photography, fine arts, and culture. Working together closely with international artists, authors, museums and cultural institutions, Kehrer Verlag creates its publications in alliance with Kehrer Design.
kehrerverlag.com