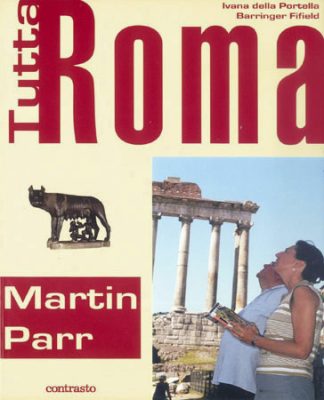 Tutta Roma stems from the Rome International Festival of Photography. For the 2006 edition, the city assigned British photographer Martin Parr the task of creating a comprehensive guide of the eternal city. His resulting portrait is that of a place filled not only with natives but, above all, with visitors, the latter contributing to Rome’s life with their enthusiasm and curiosity, their many languages and fashions, their colorful presence. With extended captions written by Ivana della Portella, a historian and member of the Municipality Council of Rome.

Beloved by Italians and outsiders alike, Rome has always inspired foreign artists and intellectuals. Following Henry James, Howard Hawks, and William Klein, Martin Parr shows us today’s tourists in today’s Rome, in its archaeological sites, in its museums, and in its famous piazzas, as they struggle with maps and guides, as they consume pasta and wine. He takes on Rome with his unconventional and controversial trademark style, capturing the unique beauty of a city that owes much of its fascination to its swarms of devoted admirers.

About the Publisher
Contrasto Books is an Italian publisher, concentrating on photography.
contrastobooks.com