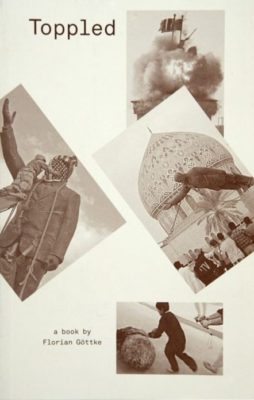 Florian Göttke collected hundreds of press and amateur photographs of the toppling of statues of Saddam Hussein from the internet. He used this digital archive to create the iconographic project Toppled. A close reading of these images reveals an astonishing amount of information about what happened in Iraq, about the statues’ desecration and humiliation, their transformation from manifestations of Saddam’s totalitarian power into icons for the defeat of his regime, their expulsion from the public sphere, their appropriation into his enemies’ museums and their symbolic reinterpretation for use in anti-war protests.

In her article on Toppled in Open 13 The Rise of the Informal Media, Jorinde Seijdel wrote: ‘The destruction of images guarantees the production of images. Images also become icons themselves – or idols, depending on one’s point of view – that can be deployed as weapons in today’s political, cultural and religious battlefields. To an increasing degree, wars also take place at the level of the image.’

The photographs in Toppled show an array of attitudes towards the sculptures that expose differences between the cultures but also universally valid aspects of human relationships with carved representations. It becomes apparent, that even in our modern image culture, the ancient magical link between the person (Saddam) and his representation (statue) is still alive in the human psyche.

About the Artist
Florian Göttke is a visual artist, researcher, and writer based in Amsterdam. He combines visual modes of research (collecting, close reading, and image montage) with academic research to investigate the functioning of public images and their relationship to social memory and politics. Göttke has exhibited internationally, has written articles for academic journals and art publications. His book Toppled, an iconological study of the toppled statues of Saddam Hussein, was nominated for the Dutch Doc Award 2011. Göttke obtained a PhD Artistic Research at the University of Amsterdam and the Dutch Art Institute in 2019.

About the Publisher
Post Editions is an independent publisher dedicated to the task of initiating, producing and distributing special books on contemporary art, architecture and photography. Post Editions offers all facilities needed to develop book proposals and concepts and has over 26 years of experience.