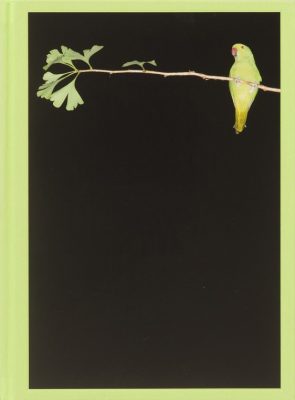 Vivid flashes of bright green flock in the trees and skies of Tokyo, the descendants of tropical aliens brought to Japan’s biggest metropolis as pets four decades ago. These escaped parakeets (not actually parrots) have since flourished in the city, and likewise fascinated photographer Yoshinori Mizutani, who upon his first encounter with them was struck by apprehension and fear, as if he had walked into Alfred Hitchcock’s ‘The Birds’. Incongruous as they seemed in the urban environment, he followed the flocks and watched their daily patterns, eventually locating one of the largest nesting places in a certain ginkgo tree. Simply surreal photos of fluttering lime green wings.

About the Artist
Yoshinori Mizutani was born in 1987 in Fukui Pref, Japan. He now lives and works in Tokyo.
yoshinori-mizutani.com

About the Publisher
Amana inc. is a Japanese visual communications company.
ahamana.jp/