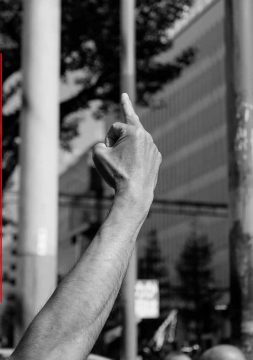 A photographic exploration of the Japanese pop world and subculture Since they first traveled to Japan together in 2005, this country has been the key focus of the joint work of Katja Stuke and Oliver Sieber. The two photographers have been tracing the excesses in the country’s subculture and pop scene and the pressures in Japanese society, while also seeking to explore urban structures and the interrelation between architectural and social barriers. Their photography is not about capturing a single image. Stuke and Sieber work in series and sequences. They create layers and mix materials, they take pictures of computer screens and posters, they construct a whole set of images and constellations, depicting various motifs with different media and equipment. The result has little to do with the traditional iconography of Japanese tea ceremonies and rock gardens. Stuke and Sieber are not interested in noble or nostalgic settings. In their photo series and compositions, Japan emerges as a country of tarmac roads and sidewalks, of power lines and garage doors, a country of flickering TV screens and virtual realities.