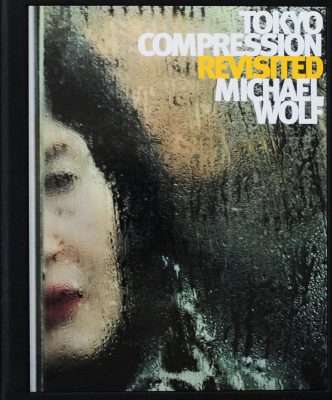 Undergrounds and subways have been a topic of interest for many other artists before Wolf, including famous names such as Bruce Davidson and Walker Evans. But the concept as well as the metonymy of ‘Compression’ is original. Wolf is not interested in seat cushions, graffiti, interior architecture, or their relationship to the traveller ; rather, he uses the underground system as venue of investigating the mental state and aggregate condition of a city’s people. Wolf leaves out all distractions, focusing on just faces and figures. With his radical aesthetic, he creates pictures of terrible intensity: pictures can distress and shock as they take direct aim at the inner life of average people. With his accompanying essay Tokyo Subway Dreams, Christian Schüle delivers a gloomy diagnosis to the mass loneliness in modern megacities.
(source: https://www.lensculture.com/books/11673-michael-wolf-tokyo-compression-revisited)