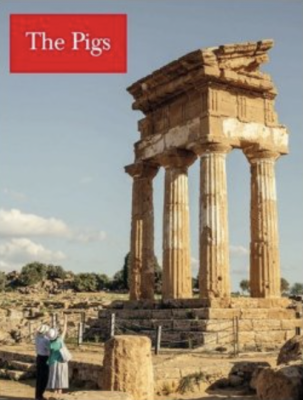 The economic news media have coined the term PIGS to refer to the weakest countries in the Eurozone: Portugal, Italy, Greece, and Spain, not including Ireland as it never had an empire to begin with and so did not have to reckon with such loss. How did Spain—an empire on which the sun never set—end up like this? Whatever happened to Italy, which still contains a large part of the world’s artistic heritage? What about Greece, the birthplace of Western civilisation? And what caused Portugal to see its future become so dim, after having dominated the seas for centuries? The Pigs is a tragicomic vision of the stereotypes, deserved or not, with which the countries of southern Europe have to live. A vision halfway between caricature and harsh reality, which reveals the wreckage of the slow shipwreck of the cradle of Europe through the eyes of a cruel economist.
(source not available online)

About the Artist
Carlos Spottorno (b. 1971, Budapest) is an Italian photographer. Spottorno initially trained in painting and printmaking, before undertaking a career as an art director in the advertising industry. Since 2001 he has been an active photographer, undertaking long-term photography projects which usually gravitate towards economy, politics and social issues.
spottorno.com
(source: spottorno.com)

About the Publishers
Editorial RM is one of the most prestigious publishers of art books in Latin America, focusing primarily on photography and contemporary art. It also maintains a select catalogue of Latin American literary classics. It is based in Barcelona and Mexico City.
editorialrm.com