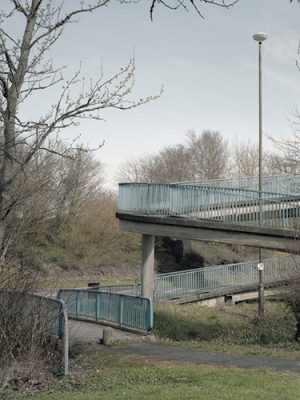 In the 1960s the ‘New City’ of Craigavon was planned and created from scratch on bogland between the towns of Lurgan and Portadown in Northern Ireland. The planners intended to link these two towns by creating a new and modern urban area with a single identity. Quality housing, high-speed railway, modern leisure facilities and employment were key to this concept. Most of the plans were never completed and Craigavon failed to develop a true sense of place.
(source: https://www.gavinmullan.com/the-new-city)

About the Artist
Gavin Mullan is a Northern Irish photographer based in Belfast. He graduated in Photography from the University of Ulster in 2013. His work has been featured in many online and print magazines such as Darwin Magazine and Feature Shoot.
gavinmullan.com
(source: https://www.gavinmullan.com/)

About the Publisher
The Velvet Cell is an independent photobook publisher with a specific focus on projects that explore urbanism, architecture and our modern way of living in cities. It was founded by Éanna de Fréine after he moved from Ireland to London.
thevelvetcell.com