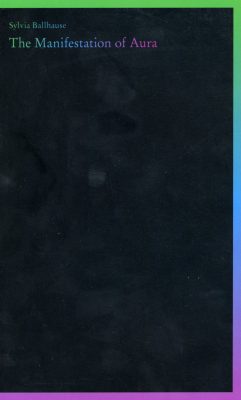 The starting point of this artwork is engagement with the term “aura” in the theory of art, media and photography. In the book The Manifestation of Aura, Walter Benjamin’s essay “The Work of Art in the Age of Mechanical Reproduction” is reduced to groups of words with the term “aura”. All other text passages are not visible, but still present through the white, empty spaces. The term “aura” – which Benjamin defined here for the first time in a more precise way – is taken out of context for the most part. The decline of this aura, which Benjamin proclaims in the essay, is on the one hand emphasized through the reduction of the text and on the other hand applied to the content itself by deleting the text. Walter Benjamin introduced the term “aura” into art discourse through this essay, especially in the fields of photography and media. He used this term in 8 passages with several different meanings.

This varied and fragmented use of the term makes it impossible to come to a clear understanding of his idea of “aura” – instead a kind of “blurred image” appear. These blurred images occur again in the AuraCam Images (1–8). While reading Walter Benjamin’s essay, especially the 8 passages with the term “aura”, an image will be exposed by a so-called aura camera. Constructed in the 1990s the camera is claimed to record and depict a human aura. Using a biofeedback measuring tool with two sensors the camera converts energy impulses in the palms with the help of a computer program into an auric image. Normally, a double exposure records the person in front of the camera first and then the coloured light in the camera. The “AuraCam Images (1-8)” show only the second exposure. They unveil the pure, coloured light in the camera which constitutes the emanating aura. According to the (emotional) state and the measured impulses, different coloured cloud formations appear in the image.
(source: http://szim.de/project/the-manifestation-of-aura/)

About the Artist
Sylvia Ballhause was born in 1977 in Halle (Saale), Germany. After an apprenticeship as graphic-designer she graduated in communications design with a focus on photography in Darmstadt, Germany, in 2002. She is currently working at Zephyr – Raum für Fotografie in Mannheim.
sylviaballhause.de
(source: https://www.hfg-offenbach.de/en/calendar/hunting#event)