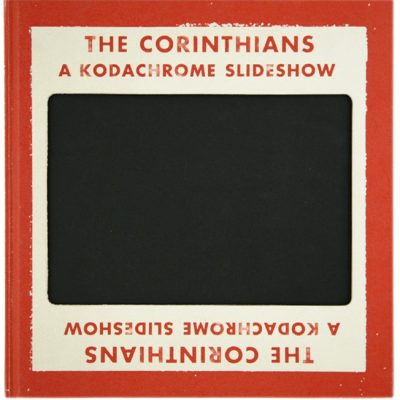 With the demise of Kodachrome film in 2009, the colour palette that in many ways defined an era also disappeared. The 200+ Kodachrome slides selected by Ed Jones and Timothy Prus for reproduction in The Corinthians: A Kodachrome Slideshow – a visual commentary on the letters of St Paul – portray the new prosperity of a postwar United States, where TVs, barbecues, big cars and summer vacations take centre stage.
(source: https://archiveofmodernconflict.com/the-corinthians-kodachrome-slideshow/)

About the Artists
Ed Jones is an editor at the Archive of Modern Conflict.

Timothy Prus (b. 1959) is an English visual artist and curator of Archive of Modern Conflict since 1992. He is also an exhibition organiser and a photobook editor. His previous publications include Whale’s Eyelash (2014), Nein, Onkle (2007), Scrapbook (2009) and The Corinthians (2008). Previous exhibitions include Lodz Ghetto (Muzeum Sztuki, 2005), Collected Shadows (Museum of Contemporary Art, Toronto, 2013), Notes Homes (FORMAT International Photography Festival, Derby, 2013), The Great Refusal (2013) and A Guide to the Protection of the Public in Peacetime (Tate Modern, London, 2014).
(source: https://www.rencontres-arles.com/en/commissaires/view/90/timothy-prus)
About the Publisher
The Archive of Modern Conflict is an organisation dedicated to the collection and preservation of vernacular photographs, objects, artefacts, curiosities, and ephemera. Founded in 1991, the archive began as a collection of photographs relating to war and conflict but has since expanded its remit to become the vast and thematically diverse repository it is today. They have produced and published over thirty books, often collaborating with photographers and artists such as Stephen Gill, Cristina de Middel, Thomas Mailaender, Adam Broomberg and Oliver Chanarin, and Don McCullin.
archiveofmodernconflict.com
(source: https://archiveofmodernconflict.com/about-us/)