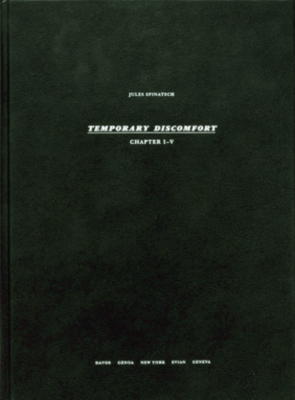 Jules Spinatsch was at the World Economic Forum and also attended the G8 summits at Davos and Evian. But rather than street fighting and handshakes, Jules Spinatsch shows winter nights in Davos, complete with floodlighted barbed wire, containers being used as barricades in Genoa, lonely TV reporters outside broadcast vehicles and sleepy guards in New York. Temporary Discomfort shows people waiting for the big event, which is revealed as meticulously planned down to the last detail.

Temporary Discomfort: Chapter I – V was chosen by Martin Parr as one of the Best Books of the Decade. ‘Spinatsch photographs from the fringes of big events like the G8 and focuses entirely on the security forces,’ Parr explains. ‘The printing, the design, and the ambition work very well. It possesses all the elements so many books lack: rigor, discipline, the correct production values. It’s one of the most coherent and challenging books of the past decade.“
(source: https://www.abebooks.co.uk/9783037780473/Temporary-Discomfort-Spinatsch-Jules-3037780479/plp and https://jules-spinatsch.ch/temporary-discomfort/)

About the Artist
Jules Spinatsch (b. 1964, Davos) is a photographer and educator. Growing up in Switzerland, he studied electrotechnics and sociology at the University of Zurich, and attended the school at the International Center of Photography in New York. He was awarded the first annual BMW-Paris Photo Prize in 2004.
(source: http://www.artnet.com/artists/jules-spinatsch/)

About the Publisher
Lars Müller Publishers is an internationally renowned publishing house based in Zurich, Switzerland.
lars-mueller-publishers.com