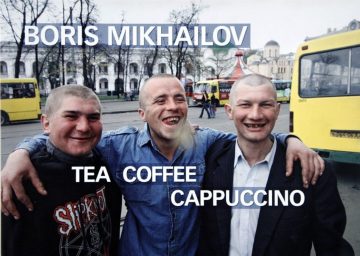 The images in Tea Coffee Cappuccino, most of them taken over the past 10 years, represent life in Ukraine and form a continuation of the three main series Mikhailov did in the past reflecting the collapse of the Soviet world (By the Ground, 1991; At Dusk, 1993; and Case History, 1997). In this new series Mikhailov continues the search of the changes occurring in the post-Soviet era. As he states in the afterword, “A new age has come—the age of business…”. Everything can be bought and sold. Most of the photos were taken in Kharkiv, but similar scenes can be found in Moscow, Odessa, Kiev… From the poor who survived the difficult 1990s to a new social stratum formed by small proprietors and private businessmen, Mikhailov depicts the arrival of large-scale industrial capitalism into Ukrainian people lives. These photos were taken between 2000 and 2010.
(source: https://www.ivorypress.com/es/libreria/shop/tea-coffee-cappuccino/)

About the Artist
Ukrainian-born Boris Mikhailov is one of the leading photographers from the former Soviet Union. For over 30 years, he has explored the position of the individual within the historical mechanisms of public ideology, touching on such subjects as Ukraine under Soviet rule, the living conditions in post-communist Eastern Europe, and the fallen ideals of the Soviet Union. Although deeply rooted in a historical context, Mikhailov’s work also incorporates profoundly engaging and personal narratives of humor, lust, vulnerability, aging, and death.
(source: https://www.moma.org/calendar/exhibitions/1125)

About the Publisher
Walther König is one of the most respected art book publishers in the world, they are also the proprietor of Germany’s leading art bookstores, notably the flagship shop in Cologne. Key historical publications include Wolfgang Tillmans: Manual and the ongoing Hans Ulrich Obrist Conversation Series, while many of the imprint’s most seminal books, which originated with König, have been co-published in America by D.A.P. These include Gerhard Richter: Atlas, Gerhard Richter: Writings, Raymond Pettibon: The Books, Donald Judd: The Early Works, 1956-1968 and How You Look at It.
buchhandlung-walther-koenig.de
(source: https://www.artbook.com/waltherkonigverlag.html)