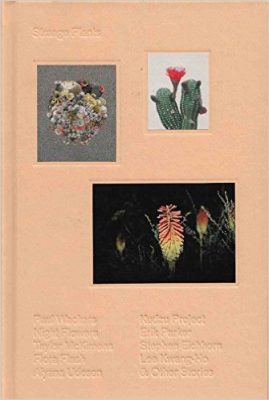 Strange Plants is a celebration of plants in contemporary art through the work of 25 artists (like Helene Schmitz, Paul Wackers, Lee Kwang-Ho, among others). The book explores the role plants play in both their lives and their creative process. From oozing paintings of rotting cacti to eerie, mesmeric photos of the leafy kudzu vine, Strange Plants combines extensive interviews with photography, paintings and sculptures from established and emerging artists who focus on flora in their work, as well as creatives who have not been inspired by plants.
The book includes 2 sheets of stickers, allowing the owner to fully customise the cover.

About the Artists
Paul Wackers born 1978 in New Haven, Connecticut, lives and works in Brooklyn, New York. The New York based artist is first of all concerned with figurative painting, which he tends to slightly abstract
paulwackers.com

Kwang-ho Lee is a Korean artist and university professor working in Seoul. He has been widely represented within Korean fine art circles but is still relatively unknown abroad. Considered to be at the forefront of the contemporary Korean realist movement
kwangholee.com

Taylor McKimens is an artist based in New York. His work is informed largely by his childhood in Winterhaven, California, and life in the small town on the Mexican border.
mckimens.com

Stephen Eichhorn (b. 1984, United States) lives and works in Chicago. He has had solo exhibitions at the Franklin Park Conservatory, Elmhurst Art Museum and the Chicago Athletic Association.
stepheneichhorn.com

Aiyana Udesen is a graphic artist/illustrator based in San Francisco, California, USA.
aiyanaudesen.com

Matt Furie graduated from Ohio Wesleyan University in Delaware, Ohio in 2001. He is a cartoonist.
mattfurie.com

Helene Schmitz’s photography explores humankind’s complicated relation to nature, time and the transience of being.
heleneschmitz.se

Erik Parker is a New York-based artist, is known for cartoonish compositions that riff on the traditional genres of portraiture and still-life.
honorfraser.com

About the publisher
Zioxla is a creative agency and independent publishing house. It published its first title, Strange Plants, in 2014. The book featured the work of 25 artists—from oozing paintings of rotting cacti to eerie, mesmeric photos of the leafy kudzu vine—and discussed the role plants play in the artists’ personal lives. Strange Plants was featured on The New York Times T Magazine, It’s Nice That, Nowness, 032c and Sight Unseen, among others, and was available in stores such as the Los Angeles County Museum of Art, Tenoversix, Colette, Restored and Marc Jacobs’ Bookmarc. The first edition sold out in less than one month.aritaux.
zioxla.com