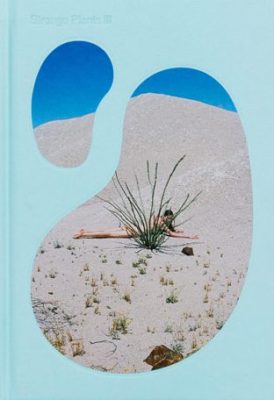 Strange Plants III is the third book in the award-winning series that celebrates plants in contemporary art. The 164-page book features the work of 50 artists (with Synchrodogs on the cover!), and includes large-scale paintings of overgrown cactus gardens; filmic and otherworldly photos of water lilies; glitchy textiles of roses sourced from social media; and so much more.

About the Artists
Zio Baritaux is a Los Angeles born, Europe based writer, editor and publisher. She was the managing editor of Swindle magazine, and has since written and/or edited more than a dozen books on art and culture.

Othelo Gervacio former graffiti artist and mentee of tattoo artist and illustrator Scott Campbell, Gervacio is no stranger to opening up his practice beyond the walls of the gallery. He balances his art making with bi-coastal creative agency Alldayeveryday and has collaborated with fashion label Off-White on graphic tee designs for their Fall/Winter 2016 collection.
(source: https://tunicastudio.com/othelo-gervacio/)

Synchrodogs is an artistic duo Roman Noven and Tania Shcheglova from Ukraine, working together since 2008.
synchrodogs.com

Marilyn Mugot is a photographer who hails from the Paris suburbs where she began drawing at an early age. Having joined a school of graphic design at the end of her adolescence, she soon found her love of photography supplanting her passion for drawing.
marilynmugot.com

Rosson Crow is an American artist, best known for her large-scale paintings.
honorfraser.com/?s=artists&aid=1

Sojourner Truth Parsons explores the female experience and her own mixed-race identity as a Black-Mi’kmaq – Caucasian Canadian woman through an audacious visual language.
(source: https://www.artsy.net/artist/sojourner-truth-parsons)

About the publisher
Zioxla is a creative agency and independent publishing house. It published its first title, Strange Plants, in 2014. The book featured the work of 25 artists—from oozing paintings of rotting cacti to eerie, mesmeric photos of the leafy kudzu vine—and discussed the role plants play in the artists’ personal lives. Strange Plants was featured on The New York Times T Magazine, It’s Nice That, Nowness, 032c and Sight Unseen, among others, and was available in stores such as the Los Angeles County Museum of Art, Tenoversix, Colette, Restored and Marc Jacobs’ Bookmarc. The first edition sold out in less than one month.aritaux.
zioxla.com