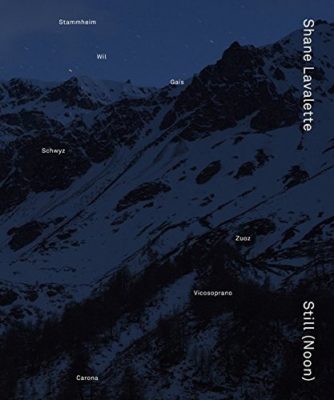 Something the Swiss are not used to experiencing is having their everyday lives documented by an outsider. They are quite comfortable with the world view of Switzerland being the familiar images found on travel postcards of mountain panoramas, shimmering lakes, the iconic fondu pot, and edelweiss. In May 2017, fotostiftung Schweiz (Swiss foundation for Photography) took an unusual step and commissioned American photographer Shane Lavalette to follow in the footsteps of Theo Frey, a leading figure in Swiss photojournalism, who eighty years earlier had been commissioned to photograph life in a dozen Swiss villages. Lavalettes job was to gather a new portrait of the same villages almost a century later. He did so in his vibrant, colour images. from soft blades of brome grass, red blooms of poppies, and gable rooftops to intimate portraits of the local families, he revealed a nuanced view of what the Swiss call home today.

About the artist
Shane Lavalette (b. 1987, Burlington, VT) is an American photographer, the founding Publisher/Editor of Lavalette, and the Director of Light Work. He holds a BFA from Tufts University in partnership with The School of the Museum of Fine Arts, Boston. Lavalette’s photographs have been shown widely, including exhibitions at the High Museum of Art, Center for Documentary Studies at Duke University, Aperture Gallery, Montserrat College of Art, The Carpenter Center for Visual Arts at Harvard University, The Center for Photography at Woodstock, The Museum of Fine Arts, Boston, and Musée de l’Elysée, in addition to being held in private and public collections. In 2016, a solo exhibition of One Sun, One Shadowwas presented at Robert Morat Galerie in Hamburg, Germany. His editorial work has been published in various magazines, including The New York Times Magazine,The New Yorker, Newsweek, Esquire, Bloomberg Businessweek, Vice Magazine, The Wire, Wallpaper*, among others. Lavalette is currently based in Upstate New York.
Shanelavalette.com

About the Publisher
The purpose of Edition Patrick Frey is to provide particularly young artists an opportunity and a platform with a first publication, but the publishing house has also been engaged in long-term collaborations with several artists such as Walter Pfeiffer, Karen Kilimnik, Anne-Lise Coste, Peter Fischli & David Weiss, and Andreas Züst. With an output of up to 25 books per year, the publisher focuses mainly on photography, art and projects dealing with everyday and popular culture.
Editionpatrickfrey.com