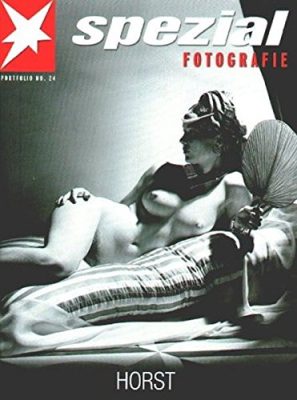 Horst P. Horst engineered the classic and elegant studio photography of the 1930s. Atmospheric with the extensive use of silhouettes, dramatic lighting and highly-posed models, he created iconic portraits of Coco Chanel, Marlene Dietrich, W.H. Auden and Truman Capote over an astonishing 60 year period. Arriving in Paris in the early 1930s, his career was to take an irreversible direction. Vogue Paris photographer, Baron Hoyingen-Huene, spotted and hired a young Horst as an assistant and sometime subject. Hoyingen-Huene’s influence bore greatly on the development of Horsts own work both in the studio and his choice of subject matter. He quickly developed a rapport with the confines and controlled lighting that the studio had to offer and gained him the reputation of the innovative photographer that he came to be. Commercial work for Vogue in the 1950s saw shoots out on location in the great outdoors and Horst was flung from the studio into a 50s wilderness. Not until the 1980s did the fashion for studio work return. Throughout that time Horst had furthered his style and much of his figurative work, mainly men and much too racy for magazines at that time, can be seen to be precursors to the Herb Ritts and Bruce Weber homoerotic shots of the 1980s. Horst maintained his standing and late in his career he photographed an advert for Klein: a pair of muscled legs cycling in the air, wearing only Calvin Klein socks. In the history of 20th-century fashion and portrait photography, Horst’s contribution figures as one of the most artistically significant and longest lasting.
(source: https://www.abebooks.co.uk/9783570192955/Horst-Spezial-Fotografie-No.24-Stern-3570192954/plp)

About the Publisher
teNeues is a publishing company founded by Dr. Heinz teNeues in Krefeld, Germany, in 1931. It is a third-generation family firm and one of the leading book publishers in the areas of photography, design, lifestyle, and travel.
books-teneues.com
(source: https://www.teneues.com/de/unternehmen)