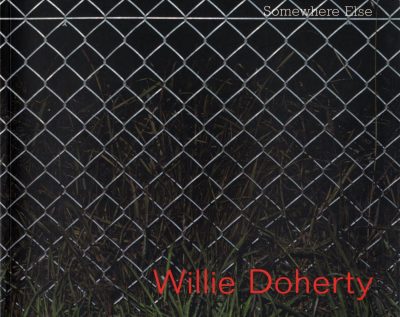 Over the past decade, Willie Doherty (b. 1959) has produced photographic, audio visual, and video work. Using as a source his local surroundings in Derry, Doherty explores the media portrayal of the conflict and violence in Northern Ireland. Designed in collaboration with the artist, this book explores more than 25 photographic and audiovisual works in depth. It brings together his earliest black and white images with large scale color photographs from the 1990s. It also documents his major new piece Somewhere Else.

About the Artist
Willie Doherty was born in Derry in 1959. He lives in County Donegal and continues to work in Derry. Since the early 1990s, he has had numerous international solo exhibitions, including the Stadtische Galerie in Lenbachhaus und Kunstbau, Munich and Hamburger Kunstverein, Hamburg; Dallas Museum of Art, Dallas, Texas; The Speed Art Museum, Louisville, Kentucky; Fruitmarket Gallery, Edinburgh; Laboratorio Arte Alameda, Mexico City; The Irish Museum of Modern Art, Dublin; The Renaissance Society, Chicago, Illinois. In 2007 he represented Northern Ireland at the 52nd Venice Biennale. His work has been presented in prestigious international group exhibitions, including DOCUMENTA 13, Kassel, Germany, 2012; Manifesta 8, Murcia, Spain, 2010; 51st Venice Biennale, Venice, Italy, 2005; 8th Istanbul Biennial, Istanbul, Turkey, 2003; 25th Sao Paulo Biennial, Sao Paulo, Brazil, 2002; and Carnegie International, Pittsburgh, PA,1999. He was shortlisted for the Turner Prize twice, in 1994 and 2003, and was awarded a DAAD residency, Berlin, 1999. He joined the University of Ulster in 1998, and has been Professor of Video Art since 2005.
williedoherty.com
(source: https://www.nmni.com/whats-on/willie-doherty-where)

About the Publisher
Tate Publishing is a publisher of visual arts books, associated with the Tate Gallery in London, England. It was established in 1911; nowadays it is a division of Tate Enterprises Ltd, an independent company wholly owned by the Trustees of Tate, and is based at Tate Britain, Millbank, London.
tate.org.uk
(source: https://en.wikipedia.org/wiki/Tate_Publishing_Ltd)