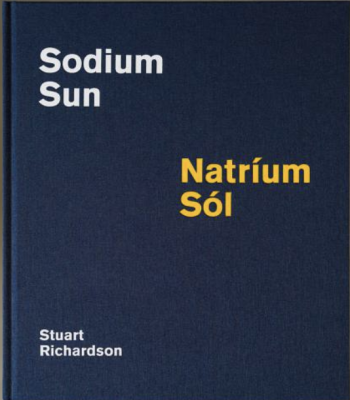 The relentless darkness of Icelandic winter evokes images of snow-covered landscapes lit by the moon and the aurora, yet most Icelanders experience the winter under the constant glow of streetlights. Sodium Sun examines how these ever-present streetlights influence the Icelandic landscape.

In Iceland, the streetlights are the first indicator of suburban sprawl, often going up long before buildings are ever built, hinting at human life where it does not yet exist. The lights are clustered in areas where there is little traffic. They obscure the outline of landscape and all but the brightest stars. Once in their pool of light, it is nearly impossible to see anything outside of it – vast landscapes collapse into claustrophobic islands of illumination. Yet even as they block out the natural environment, there is stark beauty in the geometric forms – the artificial suns we have created to bring back the light.

About the Artist
Stuart Richardson was born in 1978 in Auckland, NZ and raised in Connecticut. Since 2007, he has been based in Reykjavík, where he received citizenship in 2018. He earned his MFA in photography from the Hartford Art School’s International Limited-Residency program under Robert Lyons, Michael Vahrenwald, Jörg Colberg and Mary Frey. His book dummy for Undercurrent won the Handmade Book Award for the class of 2018 and was shortlisted for the Fotobook Festival Kassel Dummy Award in 2019. His work has been shown at the National Museum of Iceland, featured in The Guardian, and exhibited in Iceland, the US, China, and throughout Europe. In addition to his photography, he runs Custom Photo Lab, where he specializes in producing exhibitions for museums, galleries and artists. Stuart works with multiple photographic formats, from 8×10 film to smartphone cameras and video. His photography is characterized by the attention paid to subtle details and forms in the natural environment, and his work often explores themes of environmentalism, the sublime, and transience – whether in relation to our experiences, to natural phenomena, or to how images render on film or video.
stuartrichardson.com