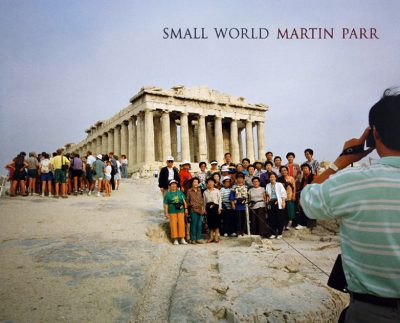 This is a revised and updated edition of Martin Parr’s classic book which was first published in 1996. Copies of the original edition of Small World are now avidly sought by collectors and demand a high premium.

It is a biting, very funny satire in which Parr looks at tourism worldwide, exposing the increasingly homogenous ‘global culture’ where in the search for different cultures those same cultures are destroyed. The issues that Parr raised a decade ago when the book was first published are even more relevant today.

Whilst Parr’s larger-than-life troupe of tourists appear willing participants in an omnipresent consumer culture they are also bemused victims – at the mercy of larger social forces and locked into their insatiable craving for spectacle. Small World‘s citizens become a symbol of western society’s prosperous freedoms, declaring their power and their rights to travel, to choose and to consume.

About the Author:
Geoff Dyer is an English writer. He is the author of four novels and seven books of non-fiction, which have won a number of literary awards and been translated into 24 languages. Kathryn Schulz, writing in New York, described him as “one of our greatest living critics, not of the arts but of life itself, and one of our most original writers”
geoffdyer.com