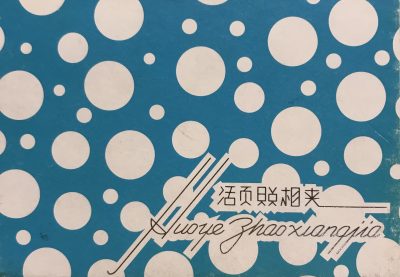 Silvermine is a photo album of 20 images, in an accordion style fold out form. The images on one side are on the subject of death, mostly funerals or images of dead people being laid out to rest. On the other side there are images of children. This photobook on the topic of life and death is a part of Sauvin’s Beijing Silvermine Project. Each image is from a negative salvaged from a recycling plant on the edge of Beijing where they had been sent to be filtered for their silver nitrate content. This photobook is a look at Chinese customs and rituals around life’s most important moments. This photobook was produced prior to the Silvermine collection by Sauvin, also published by the Archive of Modern Conflict, which is a collection of four photo albums of the same kind, on different topics derived from the Silvermine archive.

Description of Form
This photobook comes in a cuboid box with one two sides missing from it, one lengthwise and widthwise, so as to allow the photobook to fit into it. The book itself has no clear start or end, and shares the same pattern on its cover as the outer box. The outer cover of this book appears to have faded significantly in colour since its production. This photobook is signed by the artist.

About the Artist
Thomas Sauvin is a French photography collector and editor who lives in Beijing. Since 2006 he exclusively works as a consultant for the UK-based Archive of Modern Conflict,an independent archive and publisher, for whom he collects Chinese works, from contemporary photography to period publications to anonymous photography. Sauvin has had exhibitions of his work, and published through Archive of Modern Conflict.
Artist’s Instagram
(source: https://artsandculture.google.com/entity/thomas-sauvin/m0pd9w6z?hl=en)