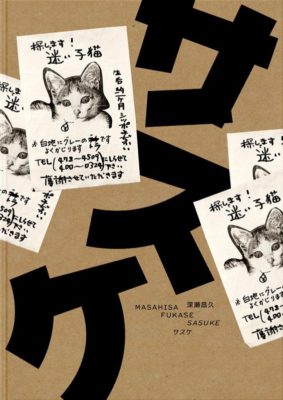 Following the survey monograph, this publication is dedicated to Masahisa Fukase’s emblematic series on his two cats: Sasuke and Momoe, combining unpublished and iconic images. In 1977, Fukase turned his lenses on his new companion Sasuke. Growing up with felines, he decides with the arrival of this new cat in his life that it would become a photographic subject in his own right, fascinated by this creature full of life named after a legendary ninja. Sasuke disappears after ten days and the photographer sticks hundreds of small posters (as featured on the cover of the book) in his neighborhood. A person brings back his cat, yet it is not Sasuke but nevermind he welcomes this new cat with as much affection. One year later, he takes a second cat named Momoe, entering the frame as well and he will never get tired of photographing their games. They become for the Japanese photographer a boundless experimental field leading to an extraordinary body of work in its technical and visual inventiveness. As often in his work, this series shows a form of projection of the photographer into his subject. The cat, a faithful companion who never leaves him, takes the place of his wife, eternal heartache, later represented by the iconic fleeing crows. His cats have been the subject of several books in his lifetime and Tomo Kosuga has dug into the photographer’s archives to conceive this ultimate book as the achievement of a series of publications devoted to his cats.

About the Artist
Masahisa Fukase (Hokkaido, 1934 – 2012) is considered one of the most radical and experimental photographers of the post-war generation in Japan. He would become world-renowned for his photographic series and subsequent publication Karasu (The English title: Ravens, 1975 – 1985), which is widely celebrated as a photographic masterpiece. And yet the larger part of his oeuvre remained largely inaccessible for over two decades. In 1992 a tragic fall had left the artist with permanent brain damage, and it was only after his death in 2012 that the archives were gradually disclosed. Since then a wealth of material has surfaced that had never been shown before.

About the Publisher
Atelier EXB / Éditions Xavier Barral publish books taking a visual approach to the new shapes of photography, contemporary art and sciences. Founded in 2002 by Xavier Barral, the publishing house conceives each book where style and content meet to tell an astonishing and singular story. Raising curiosity through the image and bringing one to discover new artistic voices, subjects that belong to our history.