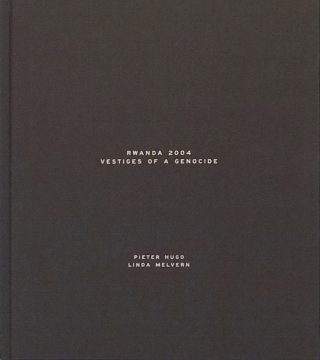 In 2004 South African photographer Pieter Hugo was astonished by a photograph used to illustrate an article on the Rwandan genocide. The picture showed a human skull on an altar inside the Catholic church at Ntarama, south of Kigali. Ten years previously an estimated 5,000 Tutsis were massacred there by government soldiers, civilians and the feared Interahamwe; across Rwanda many victims had believed, mistakenly, that churches would provide secure refuge. But what most arrested Hugo was the fact that a decade after the killings (the photograph was made in 2004) the evidence, remains and detritus of genocide were still to be seen. He resolved to visit, ‘photographing and contemplating’ the sites of Rwanda’s carnage. The results of that journey are now published as Rwanda 2004: Vestiges of a Genocide offering, he writes, “a glimpse of what I saw there before the reburials took place.”

About the Artists
Pieter Hugo (born 1976 in Johannesburg) is a photographic artist living in Cape Town.
pieterhugo.com

Linda Melvern was a news reporter on the Evening Standard newspaper at a time when five editions a day were produced from a cramped and dingy office in Shoe Lane just off Fleet Street in London. She worked under the editorships of Charles Wintour and Simon Jenkins. She was recruited to the Sunday Times by Sir Harold Evans following her exclusive coverage of the anti-Apartheid movement and her frontpage story confirming that Steve Biko, the South African Black Consciousness leader, had been brutally murdered in police custody in September 1977.
lindamelvern.com
(source: https://lindamelvern.com/bio/)

About the Publisher
Based in London and Paris, oodee is an independent publishing house working closely with established and emerging photographers and dedicate on designing and printing unique contemporary photography books. Oodee promotes work of international young female photographers.
oodee.net