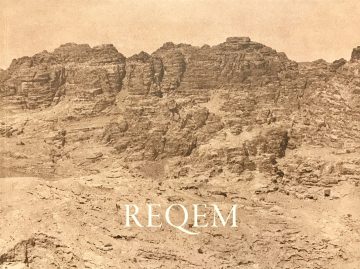 REQEM, Walk in the Desert I and II
Inger Lise Rasmussen
The Museum of Ancient Art and Archaeology, Aarhus University
Danish and English

The first series is from the necropolis Petra in the Jordanian desert. More than 2000 years ago it was the prosperous capital of the Nabataeans and a centre for caravans. It lost importance when the caravans took a short cut and sailed up the Red Sea with the monsoon winds to get to their trade destination at the Mediterranean. Here the history of Petra-Reqem is used as a metaphor of our time.

About the Artist
Inger Lise Rasmussen trained as a visual artist, more specifically as a graphicist. Her interest in photography has always existed, but it was not until the beginning of the nineties, when it became possible to work with polymer photogravure, that she began to work professionally with it. She is particularly fascinated by big cities. However, these should not be understood simply as specific cities; they should be seen just as much as an interpretation of the conditions in which modern urban man lives.
Ingerliserasmussen.dk

The Museum of Ancient Art was founded by Professor P. J. Riis in 1949 as a study collection for the Department of Classical Archaeology at the University of Aarhus. The core of the collection was 500 representative finds from the classical cultures of the Mediterranean countries, permanently loaned to the collection by the National Museum in Copenhagen. In addition to this were a number of plaster casts of classical sculptures from the former Aarhus Museum.

Over the years the collection has grown steadily, and in 1971, on the initiative of Professor Kristian Jeppesen, a new exhibition area was inaugurated under Solgården. Since 1971, the museum has grown dramatically, in part through purchases, gifts, and permanent loans. The new physical surroundings and the many new acquisitions have created a museum that is not only suitable as a study collection, but which is also useful to upper secondary school classes, artists, and those with a general interest in ancient art.  As a result of this, the collection changed its name to the Museum of Ancient Art in 1986.
antikmuseet.au.dk