Putting Back The Wall 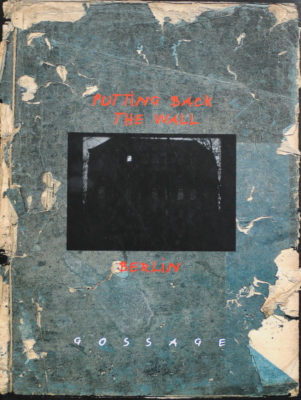 This companion volume to the 2005 “Berlin in the Time of the Wall” presents Gossage’s Berlin photographs from 1982-1989 revisited as memory. There are documentary photographs, which might promise clarity – yet deliver only mystery. And then there are the poetic photographs of John Gossage, which might promise invention and fiction – yet actually deliver truth. With every Gossage book there is an inevitable nod to the artistry of the Photobook. An exquisite cover fashioned from the remains of a deteriorating album sets the tone of the publication. Essays by Gerry Badger, Thomas Weski and John Gossage presented in the unconventional, yet masterful manner we have come to expect in a Gossage production. The 2007 volume will also be sold in a slip case with the 2005 “Berlin” edition. The Pond (Aperture, 1985) and Stadt de Schwarz (Loosestrife, 1987) two previous titles by Gossage are highlighted in the recently published History of the Photobook Vol. 2. (Phaidon).

About the Artist
John Gossage (b.1946) is an American photographer, noted for his artist’s books and other publications using his photographs to explore under-recognised elements of the urban environment such as abandoned tracts of land, debris and garbage, and graffiti, and themes of surveillance, memory and the relationship between architecture and power.

About the Publisher
Loosestrife Books is a specialist photobook publisher based in Rockville, Maryland, America. They have relased books by Anthony Hernandez, John Gossage and Michael Abrams.