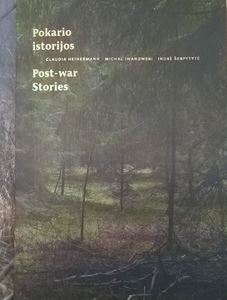 In 2014, Kaunas Photography Gallery presented the artists in Post-War Stories. The exhibition was a visual narrative in a contemporary language of art that distinctively reflects stories that took place in Lithuania after the war and in a new way actualize the past.

Wolf Children – Claudia Heinermann
From 1944, thousands of German children in East Prussia were separated from their families – many for good. They fought a battle of life and death against hunger, the cold and the arbitrariness of the Soviet world. Rescued by Lithuanian farmers, they remained behind the iron curtain under false identities. For the first time, after decades of silence, they now describe the terrors of their past and how they adapted to a new life without their loved ones.

Since 2011, the Dutch photographer Claudia Heinermann and the Finnish journalist Sonya Winterberg visited the last witnesses to record their memories and document their lives including their childhood and teenage years in the small Soviet republic of Lithuania, their feelings of captivity and their lifelong solitude.

Claudia Heinermann, born 1967 in Iserlohn, studied art at the Academy of Fine Arts in Enschede from 1986 to 1991. She started out working in mixed media with photography at its core. Over time she became more interested in documentary photography and went on to study at the Fotoacademie Amsterdam from 2004 to 2006.
claudiaheinermann.fotoplek.nl

Michal Iwanowski’s work retraces an epic journey his grandfather and great uncle made in 1945 after escaping from a prisoner-of-war camp in Russia, and in extreme hardship walked 2000 km to Poland in search of their family.
Clear of People documents this journey. The images and writing capture Iwanowski’s own travels through landscape marked by history as well as echoing his grandfather’s experience of a quest for safety in a hostile environment.

Michal Iwanowski is a Polish born, Cardiff based artist and a current Ffotogallery tutor. Iwanowski studied Documentary Photography at the University of Wales, Newport, graduating in 2008.
michaliwanowski.com

Born in Lithuania, photographic artist Indre Serpetyte is highly concerned with the impact of the Cold War on her native country and more personally, her own family.
Her subtle and moving photographs are the result of persistent and thoughtful investigation into the political history of the war, how it has been recorded and more importantly the human experience and cost of the conflict.

About the Publisher
The very first association of amateur photographers in Lithuania was established in 1933. On the 15th of January the Union of Lithuanian Art Photographers celebrated its 70th anniversary.
The Kaunas Photography Gallery extends the long publishing tradition in Lithuania, and now not only concentrates on simply presenting photographers, but also on continuing research into Lithuanian photography. Thanks to its successful publishing activities, Lithuanian photography is winning greater recognition than ever before. It is gradually becoming more acknowledged on the international scene, and is featured at major international photography book events.
shop.kaunasgallery.lt
(source: https://shop.kaunasgallery.lt/en/about/)