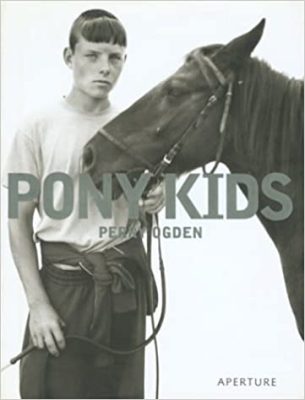 Over the past decade, an extraordinary horse culture has evolved in the housing estates that surround Dublin. Teenagers from the families of the poor and often unemployed have been keeping their ponies on patches of green in the city wastelands. Once a month a horse fair is held in the city centre. It is here that Perry Ogden made formal portraits of these kids and their ponies in an open studio.

“Like they call us Urban Cowboys. Cowboy is a bad word to use. We’re really natives, we’re really Indians, you know what I mean, we’re all Celtics. Horses are completely in our blood.”

The survival of the pony culture has been challenged by the introduction of stringent licensing laws which make it almost impossible for the kids to retain ownership of their horses. Pony Kids contains fifty0four duotone plates alongside the words of the kids themselves. Additionally, Fintan O’Toole writes about the lifestyles of these bands of kids on horseback and traces their connection to Ireland’s ethnic nomads, the Travellers.’ – From Pony Kids‘ original blurb.

About the Artist
Perry Ogden was born in Shropshire, England, grew up in London and now lives in Dublin, Ireland. His photographs have appeared in countless magazines worldwide including Italian Vogue, Luomo Vogue, British Vogue, W, the Face and Arena, and he has shot advertising campaigns for Ralph Lauren, Chloe and Calvin Klein. These have supplemented more personal projects including the Pony Kids photographs.
perryogden.com
(source: http://www.perryogden.com/about/)

About the Magazine
Aperture, a not-for-profit foundation, is a magazine, publisher and photography organisation. Created in 1952 by photographers and writers as ‘common ground for the advancement of photography,’ Aperture today is a multi-platform publisher and center for the photo community. From their base in New York, we produce, publish, and present a program of photography projects, locally and internationally.
aperture.org
(source: https://aperture.org/about/)