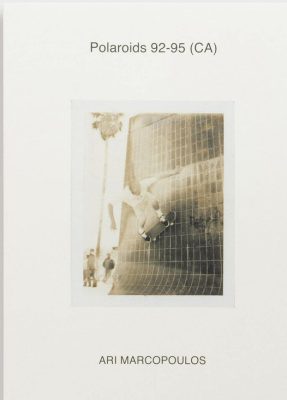 The artist Ari Marcopoulos came upon the Polaroids reproduced in this volume and its’ companion, Polaroids 92- 95 (NY), while moving studios in 2018. Only a few have ever been published before, and the decorated box that housed them, long forgotten. They depict an iconic period of skating from the early nineties with the same ease, grace and affection for his subjects that Marcopoulos is known for. Shot mainly in San Francisco as well as Santa Rosa and at Max Schaaf’s Ramp in Oakland it features some of the best known skaters of their generation including Julien Stranger, Ethan Fowler and Bob Burnquist amongst others. “As time has passed there are many names that I remember but some unfortunately I can no longer recall. These images are a result of a collaboration and understanding between the subjects and the observer. I want to thank everyone that appears in them.”

About the Artist
A photographer and filmmaker who gravitates toward elusive subcultures, Ari Marcopoulos photographs objects and cultures that pique his interest, such as sneakers with wide laces from New York’s 1980s hip-hop scene. Creating images with anthropological and ethnographic undertones, Marcopoulos has said that most of his photographs arise “through accidents or circumstances that just happen to present themselves.” Rather than romanticise his subjects, he depicts them in a straightforward manner that reveals their beauty and anxieties. Working as an assistant to Andy Warhol after emigrating to the United States, Marcopoulos favours analog film for its slowness and for the time it asks of the viewer. Most recently, he has begun to explore high-contrast landscape photography that conjures a vague and fleeting sense of familiarity.
arimarcopoulos.net
(source)

About the Publisher
Opened in September 2005 and located in NoHo at 33 Bond Street between Bowery and Lafayette, Dashwood Books has become a destination for artists, collectors and art directors from all over the world as well as a valued source for the fashion, advertising and film industries, and anyone interested in artist’s books and monographs. They specialise in contemporary photography. This includes importing books that have no or very limited distribution in the United States, limited press runs from Japan, Germany and The Netherlands, artists’ self-published books, signed books and a carefully curated selection of collectible post-war titles. They build collections for museums, educational institutions and reference libraries for designers and fashion houses. Beginning with Ari Marcopoulos’s The Chance is Higher in 2008, Dashwood has pursued an extensive publishing program, collaborating with internationally recognised artists and graphic designers to produce monographs on photography and drawing, anthologies on youth culture, and a plethora of artist’s zines and posters.
dashwoodbooks.com